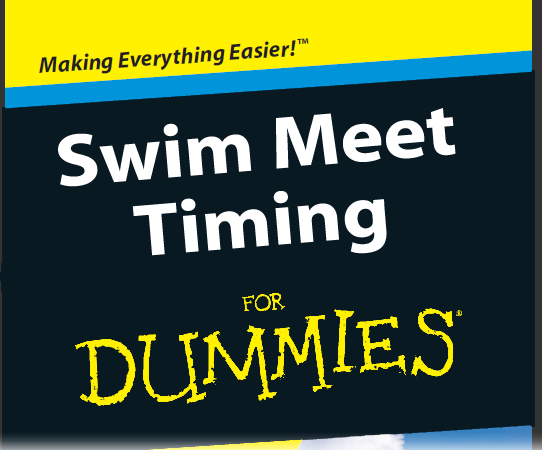 It will be easy, they said. Piece of cake, they said. But when you get down to the pool deck for the first time to time, this stuff just ain’t like summer swim, is it?

First off, if you are in a relatively high tech facility, there isn’t a standard black stopwatch you had become so accustomed to using. You get the blue contraption with no start or stop button. Comfort level immediately blown. Then there is this button thing the timer before you hands you and tell you to push at the end of the race…. what the heck is that thing? And he tells you to watch for the soft touches…hey, dude, I wasn’t planning on touching anybody, ok? And why is that kid still in the water when the race is about to start!?!

Welcome to USA Swimming Timing. Depending on the facility that hosts your meets, your timing will be more or less so like your summer timing experience. And God help you if you’ve never timed at ALL before! You may as well just put the I’M AN IDIOT T-SHIRT on right now….I kid, I kid. We are going to get you up to speed with this ultimate timer’s guide for idio…um, I mean newcomers. Actually this guide is probably good reading material for just about anyone who times, because some of you folks out there that think you are the bomb at timing? Not exactly. So let’s get started:

HOW TIMES ARE DETERMINED

In most pools the times are determined by multiple, redundant systems with the human element being the final tiebreaker in the event the automatic systems are not functional. The timing systems are called (by USA Swimming, not me, they’d never trust me to make up the rules!) primary, secondary, and you guessed it, tertiary. Here’s what those usually are in the average meet:

1. The Touchpads: when you go time, the starter giving the Timer’s briefing (you should definitely go to the timer’s meeting if you are first time timer, or are the first timer in a shift of timers, regardless) will refer to the ‘pads’, which are a set of plates as wide as the lane and about 3′ deep. These pads are pressure sensitive, and will receive a pressure signal and relay that to the electronic timing system (also repeated onto the scoreboard if you have one), which will serve as that swimmer’s official time. If the swimmer, however, hits the wall on top of the pads, or without the requisite force to immediately trigger the stop signal, this is called a ‘soft touch’ and the system will roll back to the secondary timing system.

2. The Pickle: In most facilities that host USA Swimming meets, there is one hub that receives all signals and feeds them into software from the pads and also from cabling and pushbuttons (2 per lane) that are called the ‘pickle’ buttons. This term will be familiar to almost anyone dealing with ordinance in the military, particularly aviation, as a weapons firing button is usually referred in slang as a ‘pickle’. The digital system receives the start time from cables connected to the Starters Horn push button, and when pushed, the pickle terminates the timing for that lane, establishing and official time to back up the touchpads.

3. Handheld Timing: Then there’s you. You and a compadre are behind the blocks, waiting with either a Dolphin (we’ll talk about them later) or a Mark 1 Mod 1 Standard Black timing Stopwatch getting the times, and then either writing them down for a runner to pick up, or not (Dolfin timing).

So you are the last line of defense, that takes a load off….but don’t think that your job is any less critical than that of the touchpad or the pickle. Kids soft touch all the time. And those wires…well they set right down there by the water and are constantly getting splashed on. Electronics and water don’t mix, even in a low voltage watertight cable situation. If both those two systems become compromised, you are the only person standing between that kid in the water and a possible age group state or regional qualifying time!

Now that we have laid out in detail your still important contribution to timing, it’s time to spell out the specifics of being a solid timer. You will be positioned at the finishing end of the pool, wherever that may be. Sometimes, if a pool is running 25 yard (Short Course) or 50 meter (Long Course), you will switch ends for those races. In other locations, the swimmers will start at the opposite end and come to you. The person who starts the race is the Starter, who controls that horn button, that will inevitably scare the bejeezuz out of you when they test it when you are walking near it and are not expecting it. When he hits that button, that’s when the swimmers take off, and you hit your watch or Dolfin, right? WRONG….thanks for playing, we have some nice parting gifts for you, what do we have for our unlucky contestant, Johnny?

Noooo….you always start your watch on the flash of the starter light, not on the horn.

So, Concerning the heat in question, Ma’am, did you or didn’t you push the start button on your stopwatch?

Ok, so you started the watch, now what….you wait until they are done swimming, right? Couldn’t get you that time….no, you need to look down at your watch after EVERY start to insure it started properly. If it didn’t start properly, an official investigation will be launched post meet to determine if it was an equipment malfunction or was operator error, at which time if you are found to have been in error, you can face a fine to USA Swimming of up to $5,000 and up to 15 hours of remedial timing to ‘educate’ you on proper timing techniques. That’s not true, I’m joking. That’s not even a funny joke, 15 hours of remedial timing would be enough to drive a normal man insane.

If your watch or Dolphin didn’t get started, for whatever reason, there is a person running around with about three stopwatches around their neck (you thought they were just some kind of overly paranoid timer when you first saw them, didn’t you?) who will respond to your raised hand by coming over and letting you have one of their watches they started when the race started. They are the head timer, because they are the boss of you. Just don’t be running the head timer over to your lane too often as the head timer is known to lash out at repeat offenders with a serious set of teeth and razor sharp talons. Or they’ll give you a look that feels like a serious set of teeth and razor sharp talons. Maybe I had that wrong the first go around.

Obviously you have to keep track a little bit what event is being swum so you know when you actually need to stop the race. Nothing is more embarrassing as being the only timer that jumps up to the blocks and pickles a race at 100 yards that’s a 200 yard race. Awkward.

Once the swimmer is on the home stretch of the race, you should gather up the pickle and get to the edge of the pool. And when I say edge, I mean foot up against the edge of the pool, peering over the edge. When the swimmer comes to the edge of the pool, your eyes should actually be fixed on the pad, waiting for them to arrive and touch it. Any part of it, with any part of their body. Head, hands, elbow, foot if they accidentally do a flip turn thinking they aren’t done yet, tail if they are part spider monkey and can manipulate it out it front of them to touch the pad.  ANY part. When that part touches, you hit your pickle and your stopwatch or Dolphin simultaneously. 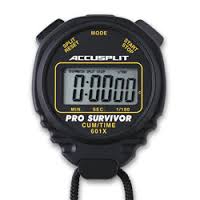 If you are using a stopwatch, you must expeditiously record the time of you and your fellow timer (hopefully the other timer is more experienced and handles the writing), so as to be ready for the next race. Once the next race is started, if that was the last heat of the event that concluded, the runner will be around to collect all your recorded times on the slip of paper. Don’t forget to hit the watch reset button.

That’s basic timing. If you have already been a timer for a few times, you may end up the senior guy in the lane. In that case you also want to try and make sure you verify each swimmer’s name when they get out of the pool to verify it matches up to the name on the sheet, and of course, you will usually be called on to write the times, which will require a decent juggling act to hold clipboard, stopwatch and pencil all with your measly two human arms.

Serious timing veterans usually get all that done, but are also on top of directing traffic with the swimmers in the pool and those waiting to swim, will know when the starter will be ready to test the pads and buttons and will direct themselves and the adjacent lanes in what to do with that, and will have a running count in their heads to back up their stopwatch which is usually good to about plus or minus a quarter second….oh, is that just me?

That pretty much wraps up this Timer 101 and Refresher post, if I missed any nuances or best practices, timing gurus out there, please be sure to add those in the comments section, and I will incorporate those into the arrticle. War/Horror stories are welcome as well. For fashion choices as timer, please look out for our What Not To Wear: Swim Meet Edition Post!

MAY THE TIMECLOCK BE EVER IN YOUR FAVOR.

2 thoughts on “Timing: It’s not the cakewalk you think!”

Leave a Reply to Reach For The Wall Cancel reply