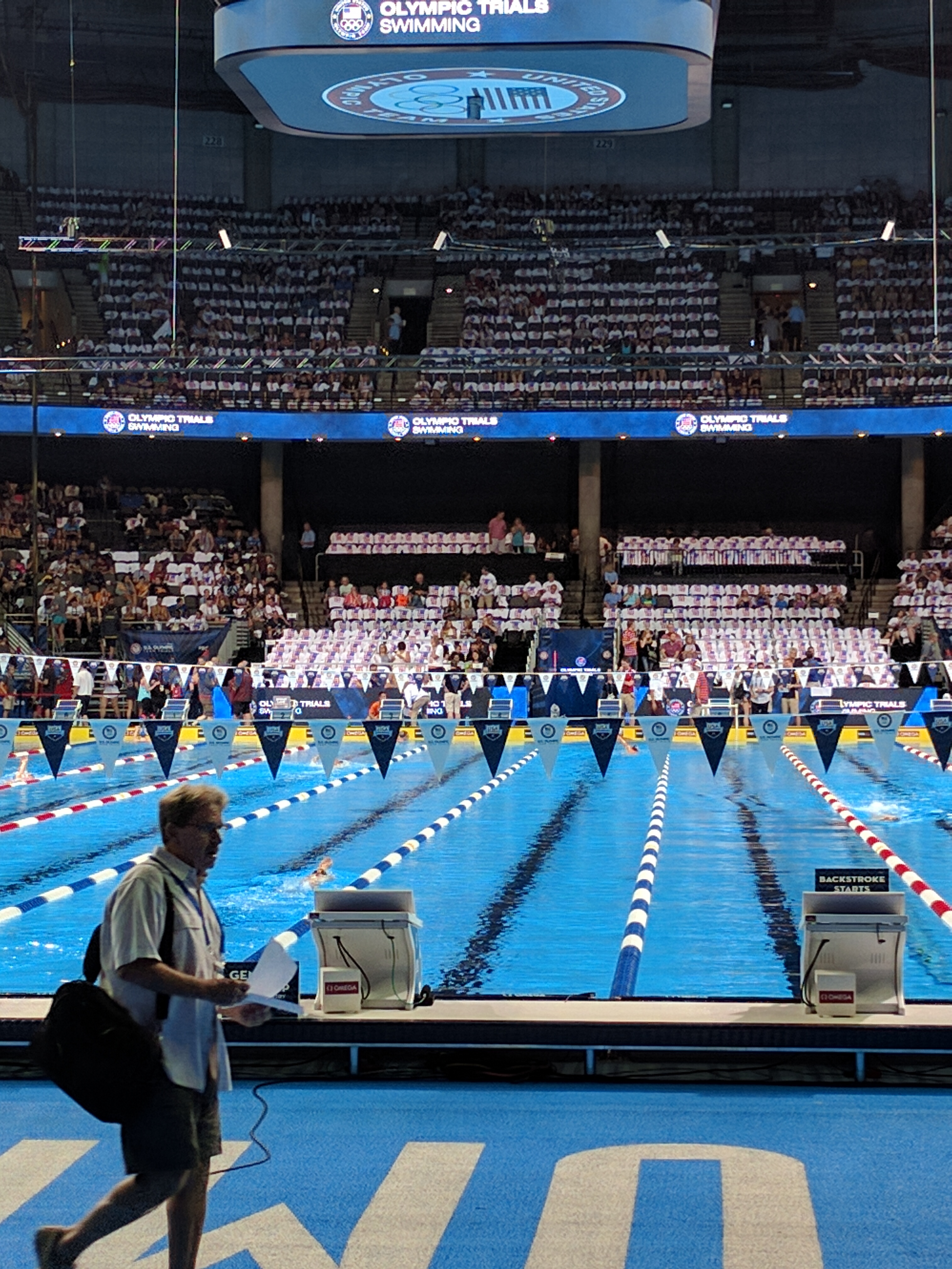 As a swimmer growing up in DC on one of the largest teams in USA swimming, the U.S. Olympic Trials meant an influx of college-aged athletes for six to eight months honing their skills as they prepare to vie for a spot on the U.S. Olympic Team.  I was fortunate enough to witness some of my newfound teammates attain their goals.  Later as a coach of collegiate athletes, I was able to provide some beneficial guidance as my swimmers aimed for Trials, the ultimate swim meet.  Now I’m a father and fan, attending my first Trials in person.  Driving into Omaha you see signs of how the city has embraced the swimming community.  Billboards, sculptures, pop-up retail in empty parking lots … all depict competitive swimming.

The CenturyLink stadium that hosted Trials is decked out with several story-tall illustrations of athletes that are literally the faces of USA swimming: Katie Ledecky, Michael Phelps, Ryan Lochte, Missy Franklin.  You don’t have to go far to find one of their likeness plastered on a wall in the city.

Friday night was a scramble.  I didn’t have tickets for the finals session, but a few phone calls and texts as we were driving into Omaha and two seats were secured.  My 9 year old daughter and I ran to the hotel room, quickly put on our festive clothes, and met up in the lobby with our friends.  Little did we know that the lobby was also the meeting place for many of the competitors families as well.  In the 15 minutes we were there, my head was on a swivel!  There’s the family of … And wow is that Jason Lezak that just passed by?! 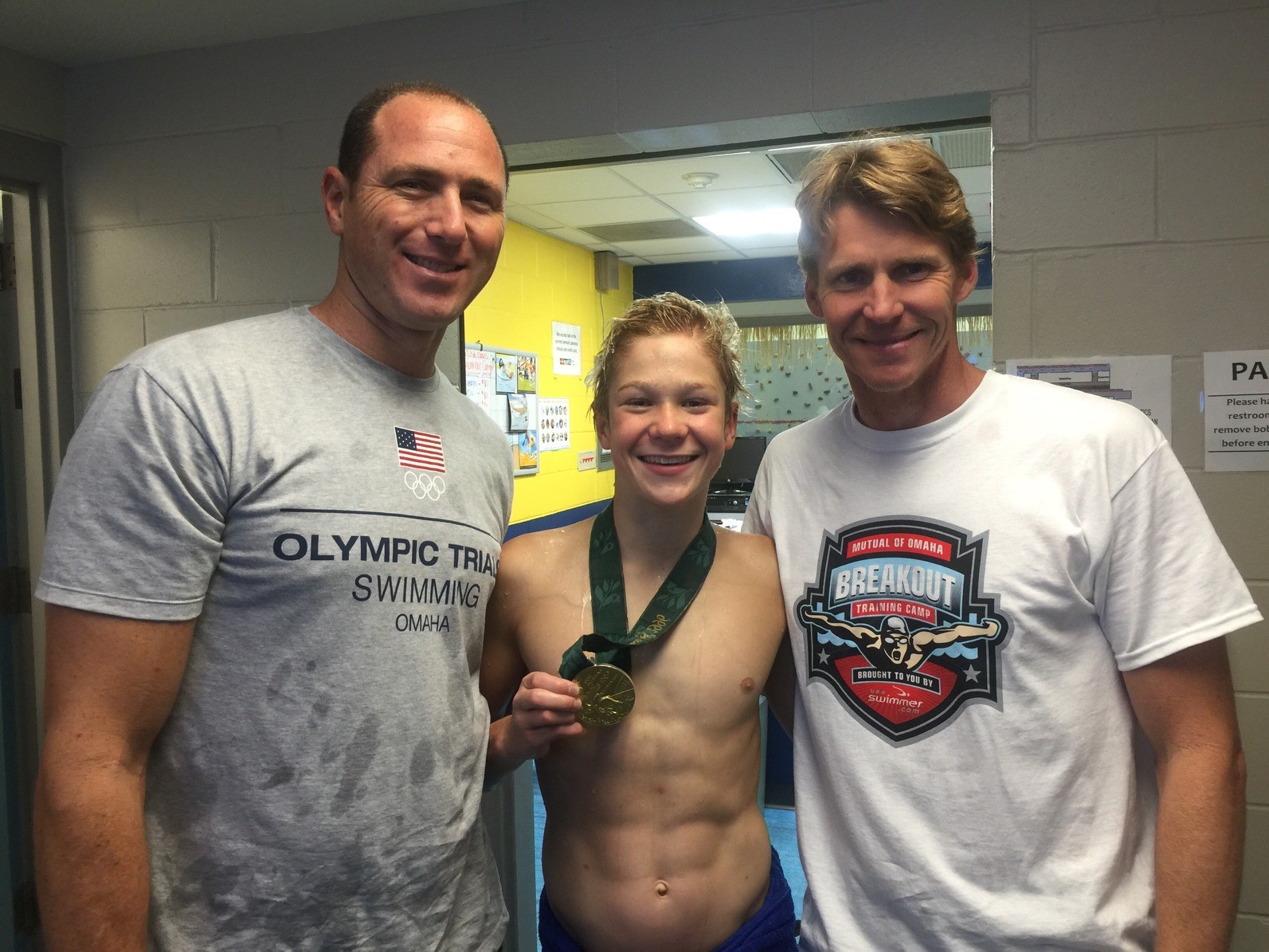 We made it into the arena just as warmups were ending.  Hopping off the blocks for a tempo 50 was Nathan Adrian, 6’6 and ripped.  As with other professional sports, whenever you see them up close, you have a vast appreciation for their size and speed.

The lights dim and the pool is illuminated. The video board is booming as they replay the races from the previous night. The images are reflected across the entire 50 meter pool as well as the multiple jumbo screens strewn throughout the area; the crowd is mesmerized, if not frozen watching the drama unfold. The familiar commentary from an enigmatic Rowdy Gaines is guiding the highlight montage and the arena lights are dancing in synch. Goosebumps and adrenaline!

The races go off with appropriate pomp and circumstance. The men’s 50 free was a bit of a chess match. With each heat, the winners dished out just enough power to give the crowd a taste, but we all knew faster swims were ahead. Wait, a tie for 8th?!! A swim off will occur at the end of the night?? Yes! Bonus swimming!

Women’s 200 breaststroke: a field full of first time Olympians with a win. Lilly King powers to the wall followed by Molly Hyannis.  Did Hyannis forget her pullout in the last turn in the excitement of the race? Even still, she claimed second.

Wow!  Men’s 200 back: two favorites from Cal – Ryan Murphy and Jacob Pebley.  They did not disappoint. Pebley finishes, looks at the clock, breaks out in tears, then smiles wide as he hugs his teammate and fellow Olympian. Raw emotion. That’s what the night is about.

Women’s 200 back semifinals saw commanding heat wins from Maya DiRado and Missy Franklin. The crowd showed appropriate approval to both, many commenting that ‘Missy’s back!’, she ‘looked real good!’

The crowd is pumped. There are three races left, Men’s 200 IM finals, Women’s 100 free finals and Men’s 100 butterfly semifinals. The 200 IM was an epic showdown between Michael Phelps and Ryan Lochte. The buzz in the arena sounded like, ‘would Ryan be able to overcome his groin injury?’ and ‘will he earn a spot at the Games to race in an individual event’?

The crowd hushed as the swimmers were announced. Swimmers take your mark. BEEP! The arena Erupts. Phelps takes an early lead, and Ryan inches closer in the backstroke leg. The whole arena jumps to their feet at the turn from back to breast, feasting on what was unfolding in the pool. This quite possibly was the last time these two legends would race on US soil. Would Ryan’s legs hold up on the breaststroke? Oh yes. He killed it! Stroke for stroke they swam. As they approached the wall in freestyle … the touch … Phelps wins! Everyone still on their feet roared to a deafening tone.  Amazing!  They replayed the finish on the screen and the crowd again displayed awe and appreciation. High fives and spontaneous dancing abound.

The next race, Women’s 100 freestyle, pitted some of the veteran National team members against the newcomers, along with Katie Ledecky, vying for a relay spot.  Abbey Weitzeil took it out and never relinquished the lead, touching in a new American Record time!  The crowd took a long time to appreciate their efforts with the veterans in the field capturing the remaining spots, Ledecky and Kelsi Worrell were 7th and 8th, but each already secured their Olympian status in other races. 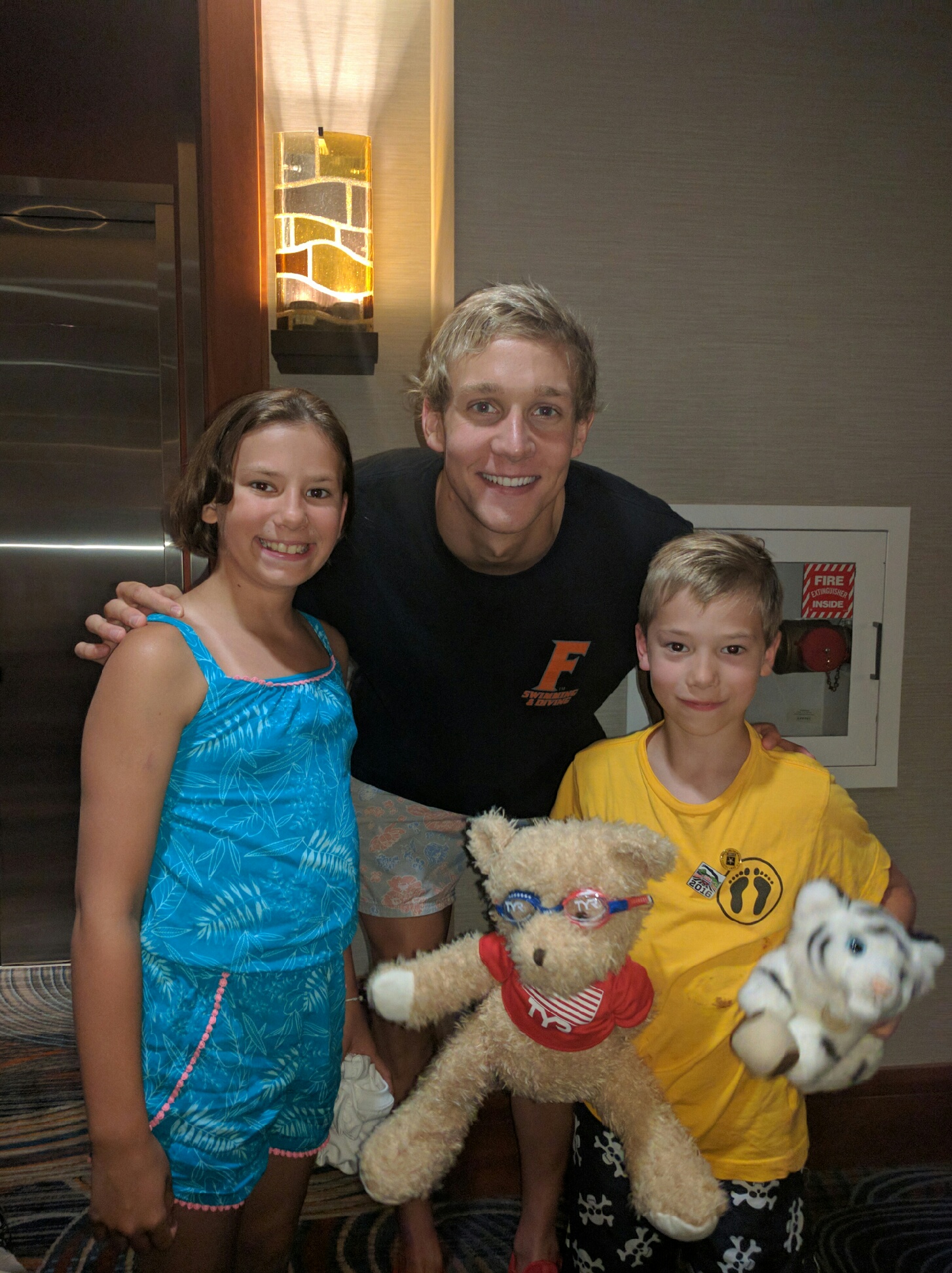 The last big race of the night, Men’s 100 butterfly semifinals featuring flyer Phelps, came a mere 10 minutes after his battle in the 200 IM. Both heats were tight races and perhaps we witnessed Michael’s age wearing on him, as he was unable to make his patented charge after the turn. But he nevertheless qualified for the final, albeit in 7th position. 10 more minutes passed and we witnessed a frenzied swim off. Josh Schneider kept his dream alive and dropped to a 21.84, a full 3 tenths faster than he did earlier .

My daughter and I are high on swimming as we walk out of the arena and cross the street back to the hotel.  In my daze, I realize I’m getting advice from fellow swimfans. “You’re at the Hilton? Go to the skywalk!” I call ahead to my wife and give her the heads up. I’m now with my daughter, two friends and their 11 and 13 year olds. The kids band together and run ahead as soon as we get in the hotel. They knew exactly where to go. A stream of athletes make their way across the skywalk, all making time to chat and sign autographs. As the crowd starts to dissipate, we catch a glimpse of Caleb Dressel outside the elevator, a quick chat and photo – we have met our first Olympian! 3 hours in Omaha, exhilarated and exhausted, it’s time for bed. If Saturday is anything like tonight, we may need a nap before finals.