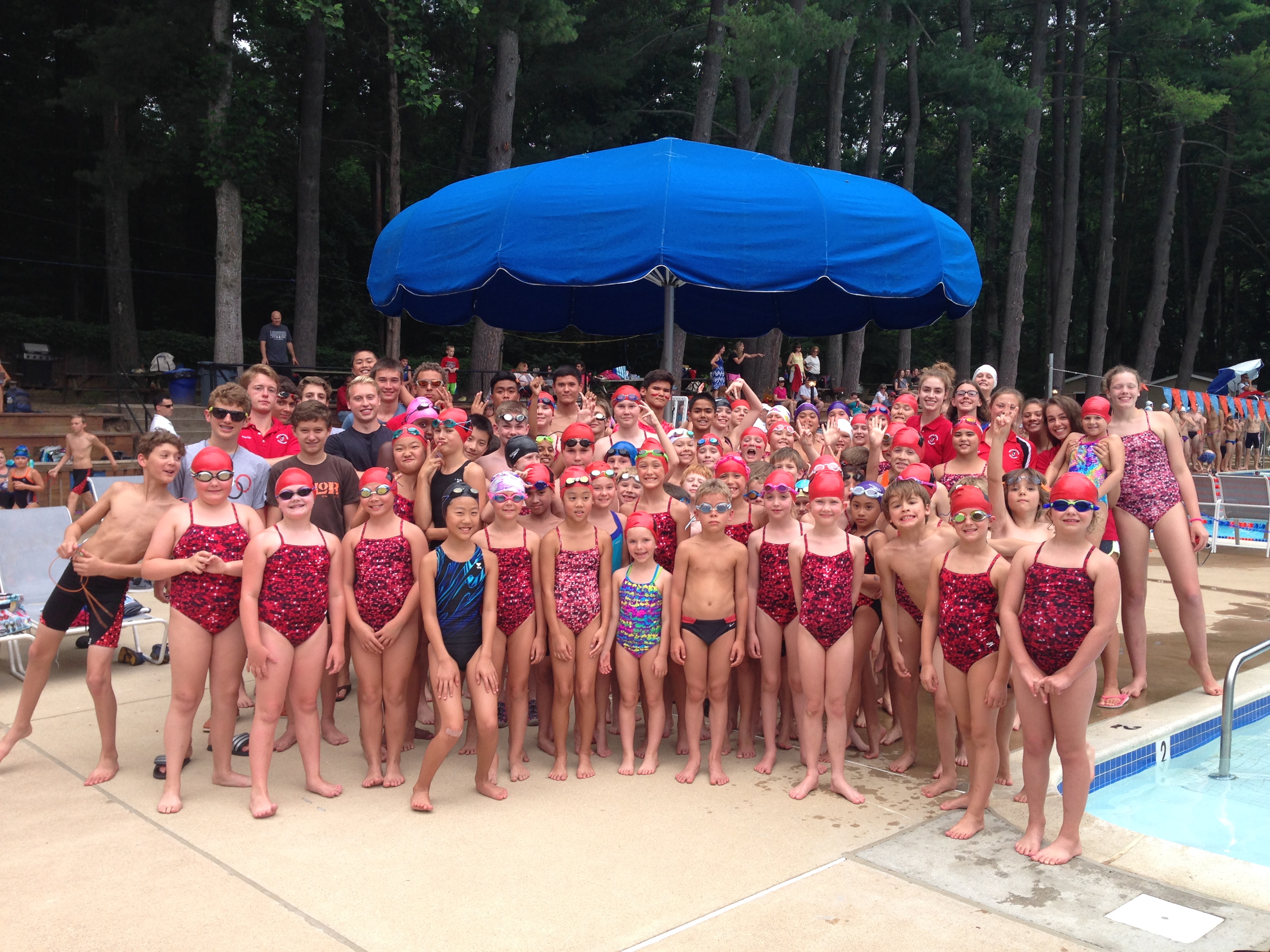 Breaking News
Jul 19, 2016Jul 19, 2016 Reach For The Wall 0 Comment
We love your contributions and that you keep us on our toes.  It was brought to our attention that we weren’t showing the wicked fast swimmers in the CSL the love they deserved.  Through some detective work on our part we were able to find these outstanding meet recaps!  We would love to get some videos and photos – please send them to contact@reachforthewall.org 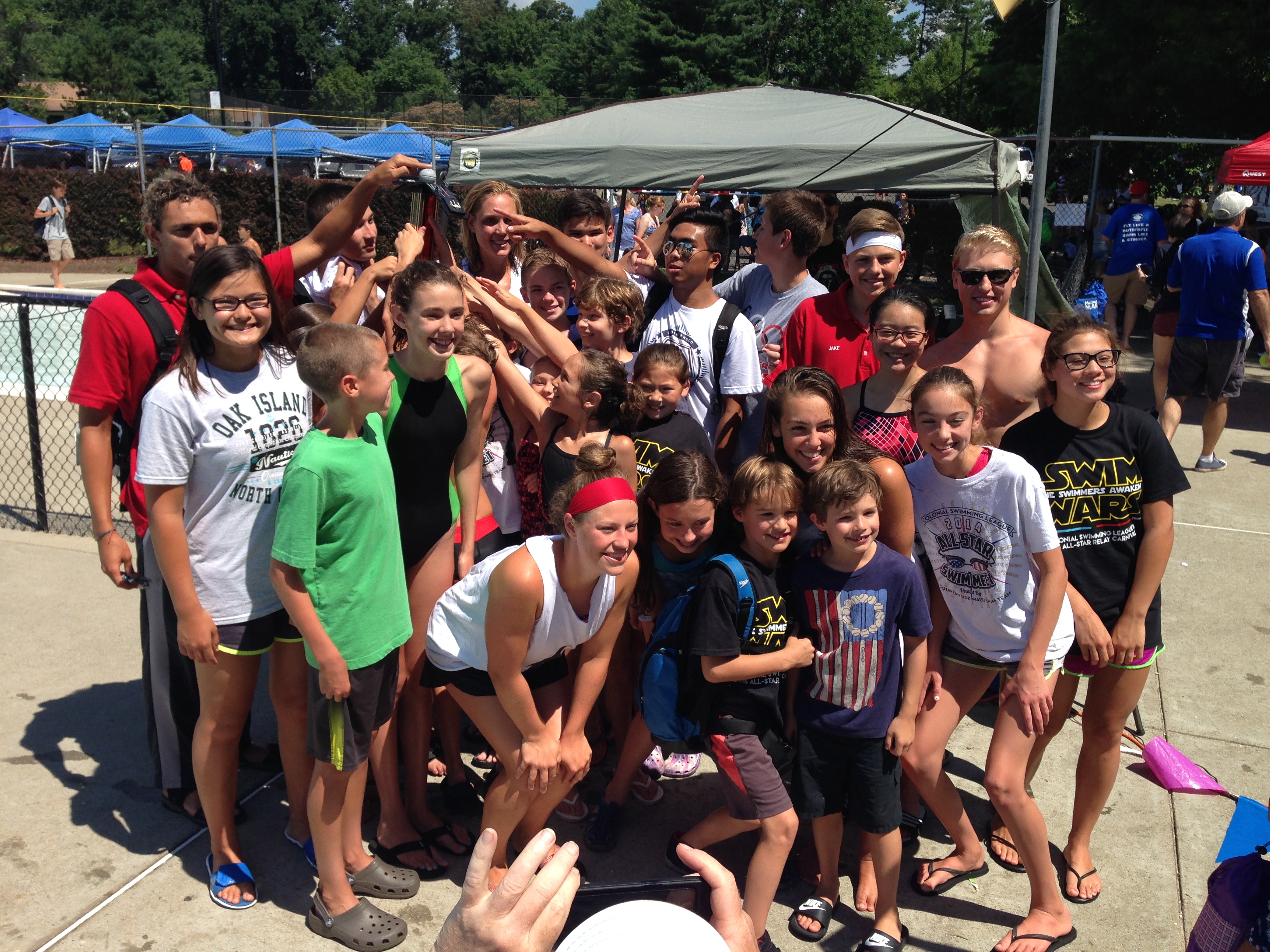 The 2016 league meet season got underway yesterday amidst comfortable weather and a continuation of last year’s trend toward increased record breaking swims. In all, 6 swimmers combined to break 94 years worth of records across 4 different events.
In the Boys 11-12 50Y Breaststroke, it was Chinqapin’s Ronan Lauinger touching the wall in 32.68, bettering the mark of 33.00 set three years ago.  The Burke Centre Penguins JT Schmid, Stephen Dalil, Christopher Goggins and Will Tighe put together a time of 1:11.36 in the Boys 9-10 200M Medley relay, well under the old mark of 1:12.80 set in 1992.
And Janika Perezous of CountrySide was at it again, this time breaking two very long standing records.  In the Girls 13-14 50Y Backstroke, her time of 27.75 eclipsed the old mark of 28.37 set in 1983.  And in the Girls 13-14 100Y Individual Medley, Janika nipped the 1982 record of 1:03.70 with a time of 1:03.59.

As is often the case, the CSL division standings have become abundantly more clear after yesterday’s 3rd round of League meets.
In the Red Division, the Burke Centre Penguins announced themselves as the clear favorite with a convincing win over previously unbeaten Franklin Farm.  Ashburn Village and Cascades are both still in the hunt with one loss apiece, but it won’t be easy for either of them.  In the White Division, the Burke Centre Stingers are now firmly in command, as they hold the tiebreakers over both 2nd place teams, ManorGate and Chinquapin.
In the Blue Division, Franklin Glen and Ashburn Farm lead the way with 3-0 records, with Armfield Farmlurking in 3rd at 2-1.  The Gators faces the Stingrays and Barracudas over the final two weeks.  And in the Gold Division, Sequoia Farms and Countryside are headed for a week 5 showdown, with Chantilly National still in the mix.
More new league records to announce…  Wednesday evening at Barrington, Angelina Sagaow of Chase Clubpowered to a time of 1:12.97 in the Girls 9-10 100Y Individual Medley, 0.51 seconds under the old mark of 1:13.48.  Yesterday at Chinquapin, it was the Wahoos’ Emil LaSida with a time of 28.46 in the Boys 11-12 50Y Backstroke, well under the previous mark of 29.26.  And finally, the homestanding Burke Centre Penguins relay consisting of Austin Henry, Luke Jones, Jacob Anglin and Vincent Cleal dropped nearly two seconds off the old record in the Boys 15-18 200M Medley relay with a time of 1:49.49.

In the Red Division, it was more of the same from the Burke Centre Penguins as they again won comfortably.  The Penguins will face once-beaten Ashburn Village in their week five meet.  A lopsided win from the Aqua Jets would win them the division, as would any win coupled with a Cascades win over Franklin Farm.  Four teams are tied at 2-2 in the White Division, creating a huge log jam for 2nd place.  It also means that the Burke Centre Stingers have clinched the division with their 4-0 record.

Undefeated Ashburn Farm visits 3-1 Franklin Glen in a week five Blue Division showdown.  The Barracudas clinch with a win, while the Gators clinch with a win plus an Armfield Farm loss to Chantilly Highlands. If both the Gators and Stingrays prevail, the two of them end up in a three-way with Ashburn Farm.  Finally, Sequioa Farmsvisits CountrySide in the battle of unbeatens that will decide the Gold Division.

One league record was set in the week four League meets.  In the Girls 11-12 50M Backstroke, South Riding’s Jennifer Luong continued to amaze, this time touching the wall in 31.61 and bettering the mark of 31.87 set in 2013.

Cool shirts, nice weather, fast swimmers and a well run meet made for another great day up at Sugarland Runfor the 2016 CSL All Star Relay Carnival.

There were very close battles for the trophies in the White and Blue Divisions.  ManorGate took first in White with a narrow eight point win over 2nd place Burke Centre Stingers.   And it was Franklin Glen edging out Armfield Farm by only three points in the Blue Division.

Finally, Sequoia Farms won eight events against its Gold opponents for a convincing win in that division.

In only the third event of the day, Franklin Farm’s Boys 8&Under 100Y Medley relay consisting of Tyler Phillips, Kevin Boulay, Jordan Koller and Topher Newman did away with a 38-year old record with a time of 1:16.45, over a second under the old mark.  Two events later, it was the Burke Centre Penguins’ JT Schmid, Stephen Dalil, Christopher Goggins and Will Tighe with a time of 1:04.12 in the Boys 9-10 100Y Medley relay to improve upon the previous record of 1:05.05 set in 2013.

In the Mixed 9-10 200Y Freestyle relay, three different teams swam under the old CSL record time of 2:04.61, which was set only last year.  In 3rd  place, it was the Ashburn Village relay consisting of Zoe Rand, Andrew Char, Isabel Will and Charlie Barker with a time of 2:02.87.  Coming in 2nd was the Burke Centre Penguins’ Skylar Morrison, Christopher Goggins, Ihn Altenburg and JT Schmid touching the wall in2:02.72.  And winning the event were Franklin Farm’s Kylie Losinski, Kacey Hu, Luke Witlin and Charlie Zindler with a time of 2:02.57.

In the Mixed 13-14 200Y Freestyle relay, it was the Burke Centre Penguins with the final record swim of the day.  Sean Altenburg, Shelby Cleal, Jackson Knouse and Ellie Oswald combined for a time of 1:42.56, just under the old mark of 1:42.81.