During the short course season in PVS (September through April), teams have to plan for and around holidays. Whether the holidays are religious or secular, athletes and their families may take some time away from the pool to celebrate the occasion. In planning out the season, some of these holiday interruptions will have a greater impact than others just because of the timing. I recall when I was competing in college, I was unable to make the trip home for Thanksgiving each year because we were in the middle of our season and I couldn’t afford the extra energy required for traveling.

With Halloween on a Monday this year, many age group teams will give their swimmers the evening off or will modify their schedules to make up Monday’s practice at another time. To entice kids to attend the ‘extra’ practice, coaches have become creative in their delivery of the workout. This past Sunday, coaches Chris Schlegel and Emily Hall at All Star Aquatics led a creative workout where the kids got to ‘choose’ their fate by picking colored chips from a cauldron for each set. The entire workout was made up of various sets lasting 15 minutes each.  Some sets were fun and silly and others had more intensity (see the graphic below). After each set, the swimmers would get out of the pool, form a line and pick their next chip out of the cauldron.  According to my wife, it was a hilarious and joyful practice to watch, full of screams and gleeful swimmers.  Schlegel reported, “The kids had a blast and it was even fun for the coaching staff to see their reactions as they chose the set”. 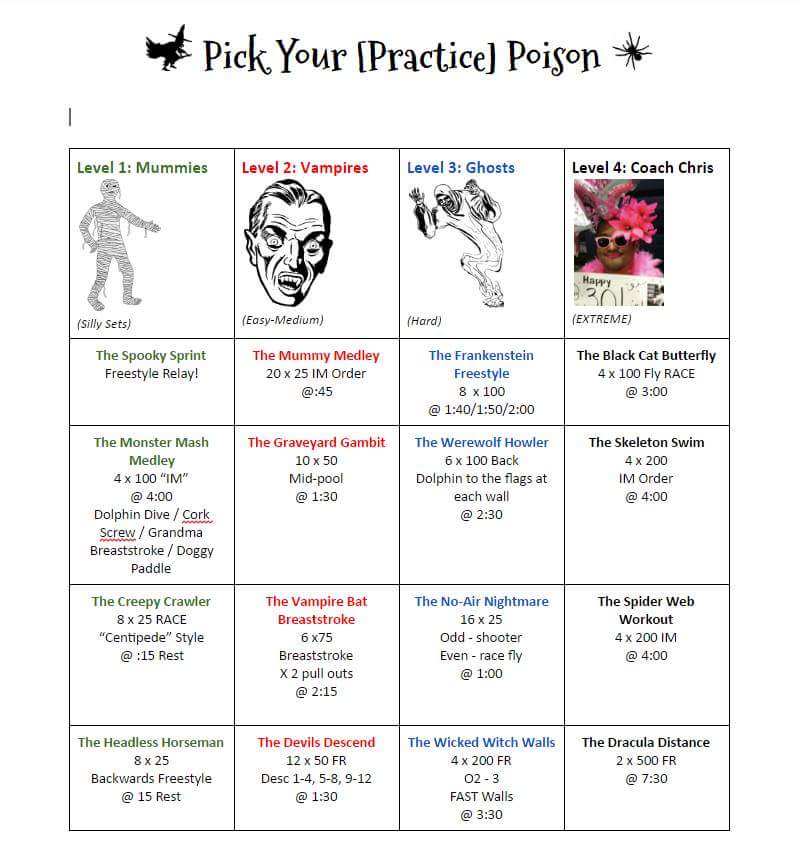 I also follow the Swim Coaches Idea Exchange Group on Facebook.  Leading into Halloween, there were quite a few posts asking for advice and offerings of ideas.  Many posts involved relay races that require multiple swimmers to execute the skill. For instance, a Frankenstein relay is where one swimmer holds the feet of another: the front swimmer does the arm strokes, while the back swimmer kicks their legs. This idea encourages teamwork as well as heightens awareness of what the body is doing in the water.

As Thanksgiving, Hanukkah, and Christmas holidays approach, what tips and tricks will your coach employ to minimize the interruption and keep your kids excited about staying in the water?