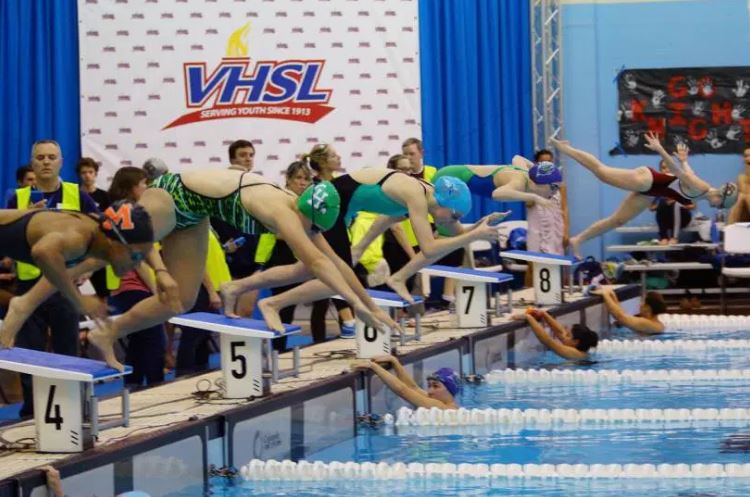 Republished by permission of swimrvablog.

High school swimming in the greater Richmond region has taken off in the last four years.  Since 2013, Henrico County swimming went from club teams to being a VHSL sanctioned sport.  It is now Chesterfield’s turn.

Later that year, several parents and other supporters began developing what would become SWIMChesterfield, Chesterfield County’s high school club swimming parent organization.   Cassie Dickerson took the lead role in development along with many other volunteer swimming enthusiasts.  “I was inspired by the swimmers I knew wanted an opportunity to represent their high school.  This role is actually many strong volunteers working together” Cassie states.

Within the first 24 hours of making posters and starting a social media presence, SWIMChesterfield’s Facebook page had over 500 likes and an overwhelming amount of support from parents started pouring in.   The small group of volunteers quickly grew and within a few weeks a board was formed, a website built, and parents reps elected to represent clubs at all 10 high schools in the County.  The board members collaborated with SwimRVA, the School Board, the Director of High School Education, Dr. Joseph Tylus, and multiple indoor swim facilities including the Collegiate School Aquatics Center, YMCA, Woodlake Swim and Racquet Club, ACAC and MAC to start building a logistical roadmap to high school swimming reality.  “We were pleased to receive the direction and support from the entire swim community” said Dickerson.

There are several big supporters to the development of SWIMChesterfield.  Dr. Joseph Tylus, the Director of High School Education, was one of those that helped guide the transition of being a concept to an actual swimming clubs in every single Chesterfield high school.  Cassie states “(He) took the time to help guide us through the official process.  He helped us in working with the school board and the individual schools.”

about the explosive growth we’ve seen in high school swimming in Chesterfield in just two short years.  Hundreds of students have taken advantage of the opportunity to represent schools, and based on what I’ve seen and heard, I believe we’ll have state champions in this sport within a short time.”

As a club team, it is completely funded by the parents.  There are no government stipends for coaches, no uniform funding from the County, and every practice, swim suit, and meet is paid for out of the pockets of those who had the courage to start something new.

“Virginia Swimming provided us with officials for our meets and the Chesterfield Aquatic League donated our computer software.  Coastal Consultants, PC sponsored several of our meets, which allowed me to sleep at night and not worry that we would run out of money before the end of our first season.  And, Hunton and Williams provides our legal needs free of charge” Cassie tell us.

SWIMChesterfield had over 230 student athletes in the first year.  This past year they grew 56% to over 360 swimmers!  It is a parent funded endeavor.  However, the original developers wanted to ensure accessibility.  They have offered several types of financial assistance such as discounts, payment plans and even private sponsorship’s.  Team uniforms were not required which also helped families elect to defray costs.

The second (and possibly last) SWIMChesterfield championship was held at the Collegiate School Aquatics Center this past Saturday, February 11th.  Every high school in Chesterfield was present and a spirited contest held in front of a sixteen by twenty foot VHSL backdrop that was installed for this week’s State Championships, reminding everyone of the goal to one day compete and win a state title.

Dr. Siddiqi, on behalf of the Chesterfield school board, relayed “The School Board is deeply appreciative of the community members who have helped build this program from the ground up.  Our parents are great advocates, and the SWIMChesterfield program is a great example of what can happen with hard work, determination and collaboration.  We look forward to supporting their efforts and turning this work into a state-champion program associated with the Virginia High School League”.

As the curtain closed Saturday night on the County championship, everyone felt like they had won.  Two years of incredible effort, support and athletic performance were on display.  As the VHSL rolls in to town February 16-18 for the 3A and 4A state championships, many in Chesterfield will be watching with a keen eye as full varsity status awaits.  Perhaps next year, there will be a team of swimmer standing on top of the podium in their own county proudly donning the title of Virginia state champion.  For now, everyone involved with swimming in Chesterfield is celebrating.

Pictures below from the 2017 SWIMChesterfield championships courtesy of Bob Bauer: