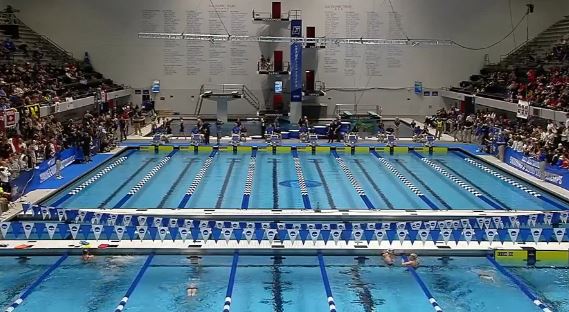 Now that the 2017 Division I Women’s NCAA Swimming & Diving Championships (NCAAs) have concluded (Stanford University won), it’s now time to turn our attention to the men.

The Men’s NCAAs (March 22-25) start this Wednesday at the historic Indiana University-Purdue University Indianapolis (IUPUI) Natatorium in downtown Indianapolis, Indiana.  As in the women’s NCAAs, the performances of swimmers and divers who grew up in the Washington D.C. metro area will be key to the success of their universities at this meet.

The Texas Longhorns are the 2-time defending national champions led by Jack Conger (Rockville, Md / Our Lady of Good Counsel), John Shebat (Oak Hill, Va / Oakton High School), diver Grayson Campbell (Vienna, Va / James Madison High School), and a supporting cast that includes Townley Haas (our neighbor from Richmond, Virginia who won a gold medal at the 2016 Rio Olympics in the 800 free relay) and Joseph Schooling (the Singapore national who beat our neighbor from Baltimore, Michael Phelps, for the gold medal in Rio in the 100 Fly).

And don’t overlook North Carolina State, who torched Texas in a dual meet earlier this season in Austin.  The Wolfpack are led by Ryan Held, who won a gold medal in Rio in the 400 meter freestyle relay with Michael Phelps, Nathan Adrian and Caeleb Dressel.

Speaking of Caeleb Dressel, he might carry his Florida Gators all the way to an NCAA championship this year. Dressel recently went a 17.86 in 50 free to tie the fastest split ever.  Silly fast.

And keep an eye on the Georgia Bulldogs, led by Chase Kalisz (Bel Air, Md / Fallston High School), who won a silver medal in Rio in the 400 meter IM.

Folks, get your popcorn ready.  This should be a fun meet.

Below are swimmers and divers from the Washington D.C. metro area who are competing in NCAA’s this week (tell us in the Comment section below who we missed so we can add them to the list).