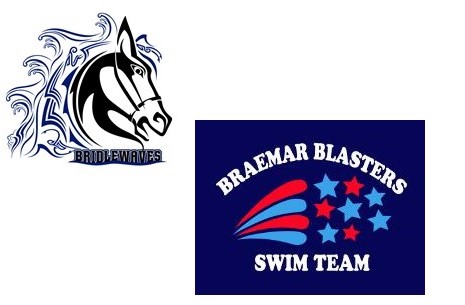 Storm warnings took most of the headlines leading up to Saturday’s meets in the Prince William Swim League. Fortunately, the weather system took a different path and the skies cleared for the Bridlewood BWaves as they prepared to host the Braemar Blasters, a formidable Blue Division opponent and league champions three of the last four years. Excitement, tension, and smoke filled the air as the BWaves high-stepped through the gates onto the pool deck for an opening cheer to get everyone ready for a memorable meet.

Outmanned by almost fifty swimmers, the BWaves took kept pace with the Blasters through the opening relays, notching a 15-point lead with a victory in the final medley relay. The see-saw battle of the relays set the tone for the entire meet as the lead would change hands several times throughout the course of the day. The two teams ran virtually neck and neck as they headed into the closing freestyle relays, which heavily favored Braemar.

Trailing by a mere six points, the BWaves dug deep and took the reins, claiming 6 of the 8 relays on the back of 4 record-setting performances. In the end, the BWaves successfully unseated the former champions by a mere 54 points, with a final tally of 2649.5 to 2595.5 in the league’s only upset of the week.

The BWaves head to Wellington next week, while the Blasters face off against Division rival Piedmont.