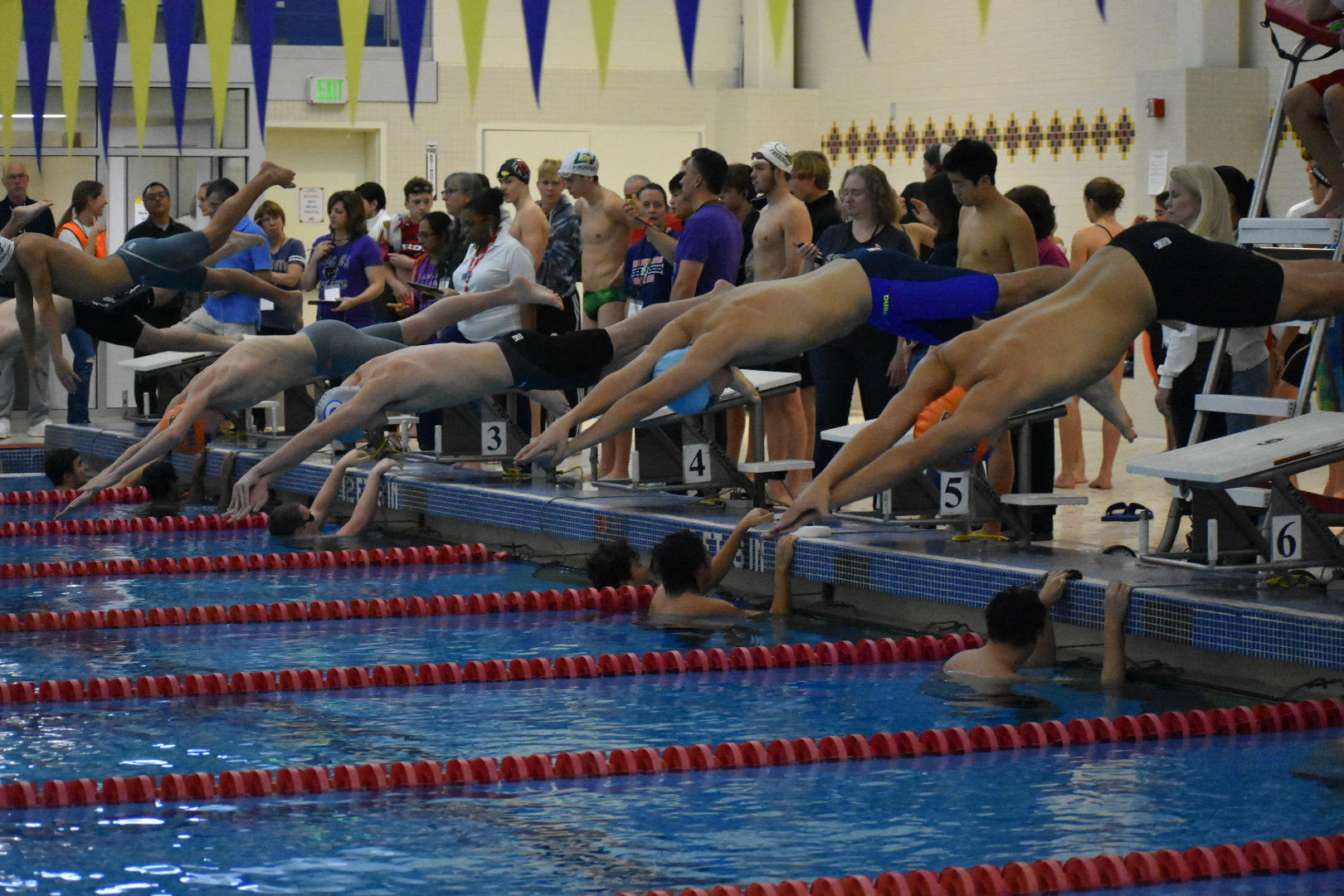 Saturday December 21, public schools in Loudoun County participated in an inaugural Invitational swim meet. Fifteen (15) teams from across Loudoun County gathered to compete in the ‘timed final’ event, with host school, Briar Woods capturing the victory in both the Men’s and Women’s competition. The timing of the meet couldn’t be better for the ‘year-round’ swimmers in that it came 1-week after the major Invitational meets that were held both in Potomac Valley and Nationally ( Speedo Eastern Jr. Nationals and US Open). Coach Eric Bateman from Briar Woods, initiated the event:

“I have always been interested in having a championship style meet for Loudoun County. Every year we are adding new schools, going through realignments, etc. we do not get the opportunity to face off against all the amazing swim talent that exists throughout Loudoun. With the support of my Athletic Director, I wrote a proposal last year to put together an all-Loudoun meet. After presenting it to the other ADs and district staff, they agreed to block off the last weekend prior to our winter break.”

Further, ” …having a big meet like this at this point in the season gave many swimmers the opportunity to get State cuts times they may not achieve until Regional championships – especially with the elimination of Conference championship meets.”

In both the Men’s and Women’s competition, Briar Woods and Riverside battled from the outset. Riverside took the early lead on the Men’s side, winning the 200 Medley Relay. Riverside’s Robert Quan finished 2nd in the 200 Freestyle (1:41.54) and Christopher Kopac nabbed 3rd in the 200 IM (in a personal best 1:56.20). Briar Woods got going with Jack Moore (committed to UVA) winning the 200 IM in a swift 1:50.28, which was just .24 slower than his swim at Jr. Nationals. Jack later went on to win the 100 breaststroke, clocking a personal best time of 56.49. The Briar Woods Women made a statement from the start by winning the 200 Medley Relay, with teammates Mackenzie McConagha, Abby Harter, Katie Winklosky, and Mackenzie Cunnane completing the event in 1:45.00, clearing the field by 4 seconds and registering a top-40 time in the country!

On the Women’s side, Independence sophomore, Tatum Wall showed her versatility by winning the 50 Freestyle in a blazing 22.86, which is currently 10th in the country, and battled Allison Kopac in the 500 Freestyle, touching 2nd by .11 seconds. Potomac Falls senior Chale Jacks (committed to Davidson) also had a great meet, finishing 2nd in the 200 Freestyle and winning the 100 Freestyle in 53.21.

Probably the most exciting events of the day came with the relays. In the 200 Freestyle relay, the Men’s race came down to Briar Woods and Rock Ridge. The Briar Woods team of Teddy Wenner, Alec Heiskanen, Colin Lewis, and Jack Moore, just touched ahead of Rock Ridge 1:27.13 to 1:27.35. the Rock Ridge team consisted of Jacob Conway, Brandon Warwick, Jack Zapp, and Trace Wall. According to the results file, the final splits were 20.61 for Jack and 19.54 for Trace!

The Women’s race was just as exciting with .5 seconds separating 1st-4th. The team from Riverside consisting of: Hannah Ye, Morgan Greig, Jordan Pham and Allison Kopac, outraced the Independence team of: Alden Zerkle, Ella McOmber, Megan Davies and Tatum Wall. Riverside touched in 1:39.48 to Independence 1:39.62. Like the Men, the anchor legs swum by Allison Kopec (23.63) and Tatum Wall (23.39) were really fast!

As we’ve seen with the International Swim League and across the country in Collegiate swimming, the Invitational/team scored format has brought much excitement and fast swimming. Coach Bateman remarked:

” The energy at the meet was outstanding. We had a large group of spectators and parent support on deck. Across the board from our 4A, 5A, and 6A schools we saw a lot of State cuts, school records, and personal best performances.  The cheering during events, especially relays, was comparable only to finals at States…it really was electric.”

Briar Woods Swimming hosted the 1st Annual Loudoun County Swimming Championship. Both the BW boys and girls came away with team titles. There were lots of incredible swims and state cuts by all teams. @LoCoSports @BWHSAthletics pic.twitter.com/DJenjpDAfU