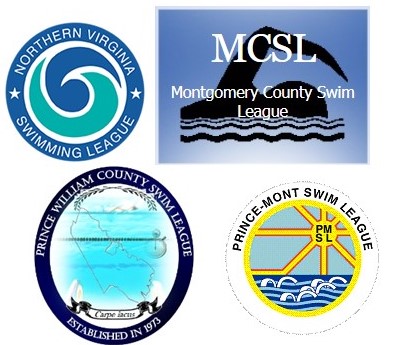 This past weekend the Northern Virginia Swim League (NVSL), Montgomery County Swim League (MCSL) and Prince William Swim League (PWSL) held their second weekend of dual meets, while Prince-Mont (PMSL) had their first week of meets. In a few of the leagues there have been some individual records broken (very impressive!!), but what’s more important is the kids (and surrounding communities) are back on the pool decks, showing their spirit and great sportsmanship!
We attended the MCSL Division ‘I’ dual meet last weekend between the Rockshire Sharks and the visiting Daleview Feet. From the time the teams entered the pool area at 7:30am, there was music, cheering, costumes, face paint and fast swimming. Daleview’s Collin McKenzie and Rockshire’s Jordan Kelly put on a show for the spectators as they pushed each other in their events to MCSL leading times.

Girls 8 & under breaststroke, some legal, some not. All smiling pic.twitter.com/Az0dMMYn2Q

The head-to-head competition was fun to watch, but more endearing was the smiles on kids faces, seeing the hugs in the spectator area from old friends reuniting after the hiatus and witnessing the young first-timers getting to swim their events. In an informal poll of spectators and volunteers, it was unanimously expressed how great it was to be back on a pool deck watching and cheering for the kids. We’re betting the other teams and leagues are sharing the same sentiment.

As mentioned, the leagues are underway, here’s a quick synopsis of what we have for league standings and accomplishments:

Northern Virginia Swim League (NVSL):
36 teams have started the season 2-0, with divisions 1, 8, 12 and 17 having three undefeated teams! In week 1, the NVSL website declared the season open with the following statement: “This weekend we begin the NVSL’s 65th season and we will kick off the celebration with the first NVSL dual meets in nearly two years. The wait was not easy, but so many different people pulled together to make this season possible. We send our sincere thanks to the Team Reps, Division Coordinators, Officials, Coaches, Parents, Volunteers and Swimmers for their hard work and perseverance under very difficult circumstances. We all have waited so long to hear…”Take your mark”.
We scoured the top times/record board and didn’t see any new records for 2021, but certainly some impressive top swims. Charis Roundtree has set the standard in the 11-12 Girls age group, with top times in the 50 Free (28.70), 50 Back (32.14), and 50 Fly (31.06).
Key matchups this week (July 3):
Division 1: Chesterbrook & Tuckahoe will meet, so one of the 3 undefeated teams will definitely have a loss.
Division 2: the winner of Langley and Crosspointe will be the lone undefeated team.
Division 8: Greenbriar and Dominion Hills will go head to head, while Hollin Meadows will look for a big upset against Dunn Loring
Division 10: Camelot & Springboard go head-to-head as undefeated teams.
Division 11: Canterbury & Highland Park dual for the division lead.
Division 12: Two of the three undefeated teams Rolling Hills and Holmes Run Acres meet, one will remain undefeated.
Division 14: Fox Hunt and Poplar Tree meet as the two undefeated teams in the division.
Division 15: Parklawn and Hollin Hills meet with one coming out with a clean record.
Division 17: Broyhill Crest at North Springfield will determine one of the remaining undefeated teams in the division.

Montgomery County Swim League (MCSL):
25 teams have started the season 2-0. The MCSL season started June 19th & the swimmers were ready to go! 13-14 standout Adriano Arioti (Rockville) got things started by setting a new MCSL record in the Boys 13-14 100 IM with a time of 58.23, breaking the old record of 59.85 from 2018. His time is over 4 seconds clear of Kyle Wang (Regency Estates) who posted a speedy 1:02.63 this past weekend. Joining Adriano in the record breaking party the first week was 12yr old Andrew Vanas (Washingtonian Woods) who broke 2 records: 50 Freestyle in 25.88 and 50 Butterfly in 28.28. The freestyle record was held by David Fitch (Potomac) who swam 26.20 in 2016 and the Butterfly was held by Kris Lawson (Bethesda) who swam 28.75 in 2017. Congratulations Adriano & Andrew!
Key Matchups this week (July 3):
Division C: Clarksburg Village travels to Woodley Gardens to meet up as the two undefeated teams in the division.
Division D: River Falls, Merrimack Park and Kentlands enter as the three undefeated teams, with Kentlands traveling to Merrimack- there will be at least 1 and maybe be 2 undefeated teams after Saturday.
Division G: Little Falls travels to Forest Knolls to determine who will remain unbeaten.
Division H: Seven Locks travels to Manchester Farm to battle it out for mid season supremacy.
Division I: Coach Andy Rosenthal and Rockshire fresh off their win over Daleview head to Calverton to take on the Chargers led by long-time coach Tony Murray

Prince William Swim League (PWSL):
June 13th, the league posted an announcement welcoming everyone back ‘on deck’: “Welcome to the long awaited 2021 swim season. I personally was unable to be on deck this weekend and can only image the faces of the swimmers, parents, volunteers and officials to finally be back at the pool. I know what it looked like at time trials. I saw so many happy faces out and about… 2021 will be know as the year of thinking outside the box to get the kids in the water… Let’s not forget our 19 year olds, who have decided to swim one more season!  Shout out to them!  As glad as we are to have them with us, we had to be fair to the upcoming 15-18 age groups by marking them as exhibition.  This has not deterred them from being competitive with their teammates.”
While we haven’t received any results files from the league this year, we see that they are posting a top 25 ranking each week:
Week 1 Top 25
Week 2 Top 25

One PWSL record was broken with Dominion Valley’s Callum O’Shea swimming 25.16 in the 13-14 boys 50 Freestyle.

Prince-Mont Swim League (PMSL):
The league started their dual meet season this past weekend with a schedule of in-person and virtual meets. Here’s a snapshot of how the season meets are scheduled:

Each week, results are posted on the league website: Results While there were no reports of league records broken in the first weekend, we’ll keep an eye out the rest of the season to see how things progress.

Overall, we’re thrilled to be able to promote each of the leagues and the swimmers. As has been reported throughout the years, the summer leagues in the DMV are the breeding grounds for future stars in this sport, whether it’s at the collegiate, Olympic or professional level, almost every one got their start at their local pool…we’re psyched the 2021 season is here & we’re able to track the next wave of superstars!