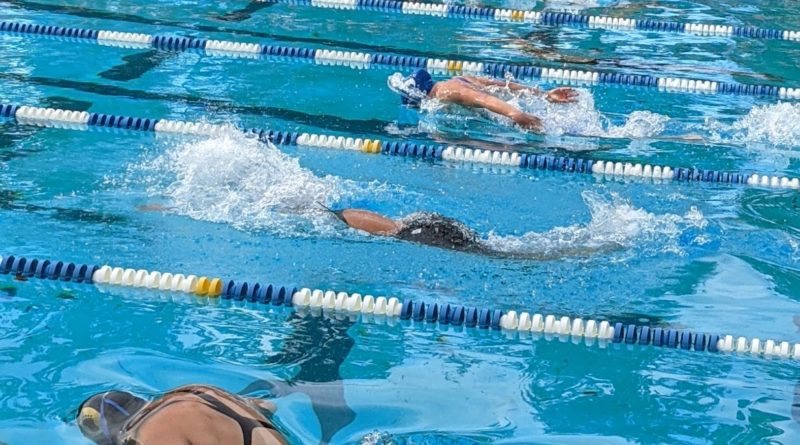 After a 1-year interruption, the Montgomery County Swim League (MCSL) hosted their showcase event- ‘Coaches Invitational Long Course Meet’ Tuesday at the Rockville Municipal Swim Center. After a day of sweltering heat, the sun began to drop below the tree line and the swimmers were back in a familiar venue. The Coaches Invitational Meet has been held on the 2nd Tuesday in July dating back to 1974. This meet provides an opportunity for the top-8 ranked swimmers in each individual event to compete the same number of lengths in the 50 meter pool. As in prior years, the meet came with a lot of anticipation and excitement. The night started with a rousing rendition of the National anthem played by Hadriel Dayanim from Flower Valley. Hadriel has been a swimmer with the Flower Valley Frogs since he was in kindergarten. He is a regular National Anthem performer for the team’s home meets.  He is a rising 8th grader at the CES Jewish Day School in Rockville, MD.

There were quite a few storylines to follow during the meet, first the addition of the 19 yr old events provided a reunion type atmosphere for those swimmers as they competed for pride against their peers, with many of the events swum combined gender. Next the number of records broken, we had some anticipation that Adriano Arioti and Andrew Vanas would make a run at the record board, but did not anticipate 6 records and several other close calls! Also seeing the number of siblings competing across the age groups was an interesting facet, this year there were 13 families (that we could tell) that had 2 or more swimmers qualify for the meet. In all there are 298 individual swimmers that qualified, of those, 162 qualified for two events (Top 10). Of those that qualified for 2 events, 9 of them were ranked 1st coming into the meet:

The meet kicked off with the IM races, starting with the 12 & Under Boys. As expected it was a back and forth race with Kirk Morgan (Seven Locks) jumping out to an early lead, and the field coming back on the breaststroke leg. At the finish it was Stonegate’s Jack Dawson taking the win in 2:31.80, followed closely by Miles Dulac (Glenwood), Trevor Donley (Calverton) and Kirk Morgan. The girls 12 & Under 200 IM was equally exciting as three girls fought to the finish with Tally Ho’s Catherine Bu touching 1st in 2:41.20, Anika Cai (Country Glen) 2nd in 2:41.73, and Rockville’s Anabel Sha in 3rd in 2:41.88. Out of the gate we saw the kids came prepared to compete & were not deterred by the weather nor the 1-year layoff from this event!
The next race up was the 13-14 200 IM and Adriano Arioti (Rockville) left no doubt he was there to go after the record. He was aggressive the first 100, touching the wall after backstroke in 1:00.46, then split a 36.82 in breaststroke, coming home in 30.80 to finish in 2:08.08, while it was slightly off his best time, it was good enough to smash the prior record by over 4 seconds!

The girls 13-14 200 IM race was not without a dramatic finish as well. Andrea Dworak (Forest Knolls) had built a commanding lead throughout the race, an effort that was too much for her swim cap. Not sure exactly when her cap departed, but the final 25 of the race her hair was flowing freely & Campbell Scofield (Montgomery Square) was closing fast. It was a touch/touch finish & Andrea took the win in 2:25.42, Campbell second in 2:25.64.
The 15-18 Boys race was a wire-to-wire win for Toby Barnett (Flower Valley). He and Liam McDonough (Northwest Branch) were pushing each other the first 100, but Toby broke it open on the breaststroke leg and closing out the freestyle leg, winning in 2:08.95, Liam touching 2nd in 2:10.32. Sophie Duncan (Bannockburn), fresh off competing at USA Swimming Olympic Trials Wave II, took command of the race during the backstroke leg and never looked back. She powered through to finish in 2:16.63, well under the prior record of 2:17.10 set by Phoebe Bacon in 2019, Catherine Belyakov (Quince Orchard) took 2nd in 2:19.50.

The Backstroke events started with wins in the 8 & Under by Rory Rawson (Mohican) and Annabel Robey (Rockville). Julia Zettler got her 2nd win of the night in the 9-10 girls Backstroke, in the subsequent event, the boys 11-12 100 Backstroke, Griffin Oehler (Woodley Gardens) won the event, making this the second sibling duo that won events! Elizabeth Chen (Stonebridge) handily won the girls 11-12 race, then Brig Barnett (Flower Valley) took the top spot in the 13-14 Backstroke race, making it the 3rd sibling combo to win an event!! 13-yr old Virginia Hinds (CCRA), fended off Nadia Thomas (Merrimack Park) and Alisa Daniel (Forest Knolls) to take the top spot in the 13-14 girls Backstroke race and in the 15-18 Boys race, Noah Rutberg (Regency Estates, also competed in USA Swimming Trials Wave I) held on to win, fending off a charging Liam McDonough (Northwest Branch) 2:07.98 to 2:08.11. Sophie Duncan (Bannockburn) took control of the race from the start and broke her second record of the night, surpassing the record from 2013 by 1.5 seconds, finishing in 2:15.87!

After a short break for warmups, the breaststrokers took to the pool, starting with the 8 & Unders. Brian Sunjaya (Germantown) spoiled Mohican’s Rory Rawson bid for a second win and got a second win for himself having also won the 50 freestyle earlier, touching just ahead 51.79 to 52.20. Grace Zettler (Potomac) got her 2nd win of the night in the girls 8 & Under race and Somerset’s Dylan Reilly got a win in the boys 9-10 race. Kenmont’s Audrey Decatur swam her first event of the night & came away with a win in the Girls 9-10 race. Luc Dionne (Old Georgetown) took the top spot in the boys 11-12 race and Catherine Bu (Tally Ho) surged to her second win of the night in the girls 11-2 race, besting the filed by almost 2 seconds. In the boys 13-14 race, Tyler Coapstick (Westleigh) touched 3rd at the 50 and charged home to take the win over Stonebridge’s Jason Li. The Girls 13-14 race was almost a repeat field from the 11-12 race held in 2019, with 6 of the 8 qualifiers in the race. As in 2019, it was a battle between Isla Bartholomew (Wildwood Manor) and Cameron House (Daleview). In 2019 Isla took the win by .04 seconds, however tonight, in a thrilling race, Cameron was able to find the wall first, out-touching Isla 1:13.78 to 1:13.84. Perhaps the same group will get together next year and double the distance? Neo Matsuyama (Seven Locks) and Dylan Danaie (Country Glen) kept the crowd buzzing as they went back and forth over the next 4 lengths of the pool, with Neo hitting the wall first, in 2:24.35 to Dylan’s 2:24.50.

The Butterfly races kicked off with Tyler Bolgiano (Regency Estates) and Sydney Chang (Upper County) winning the 8 & Under events. The two 9-10 races were close finishes, with Daniel Fry (Robin Hood) winning the boys race by .19, followed by Ellery Thomas (Chevy Chase Recreation) winning the girls race by .42! The 11-12 races were 2-person showdowns, where the boys race was won by Kirk Morgan (Seven Locks), as he held onto his fast start and out touched Andrew Vanas (Washingtonian Woods). In the girls race, the field was pretty even at the 50, with Elizabeth Chen (Stonebridge) and Caitlin Groves (Potomac) finishing 1-2, just .13 seconds apart. Adriano Arioti hit the pool for his second race and second record of the night as he powered through the 13-14 boys 100 Butterfly race. He was pushed throughout by Kyle Wang (Regency Estates) and touched the wall in 57.26, besting the record set in 2009 (57.75) by Jack Conger. Campbell Scofield (Montgomery Square) and Hailey Hammond (Little Falls) also had a close race , with Campbell winning in 1:04.21 to Hailey’s 1:04.92. Everett Oehler captured his second win of the night in 55.88 and Sarah Culkin finished her night strong with a 1:01.93, more than a second ahead Eleanor Sun (Wildwood Manor) who touched in 1:03.07.

The tagline on the program for the night read “A Triumphant Return”, and in our estimation, it was true…the spirit, competition, sportsmanship and performances were all triumphant. Thanks for providing the opportunity for the meet to happen.