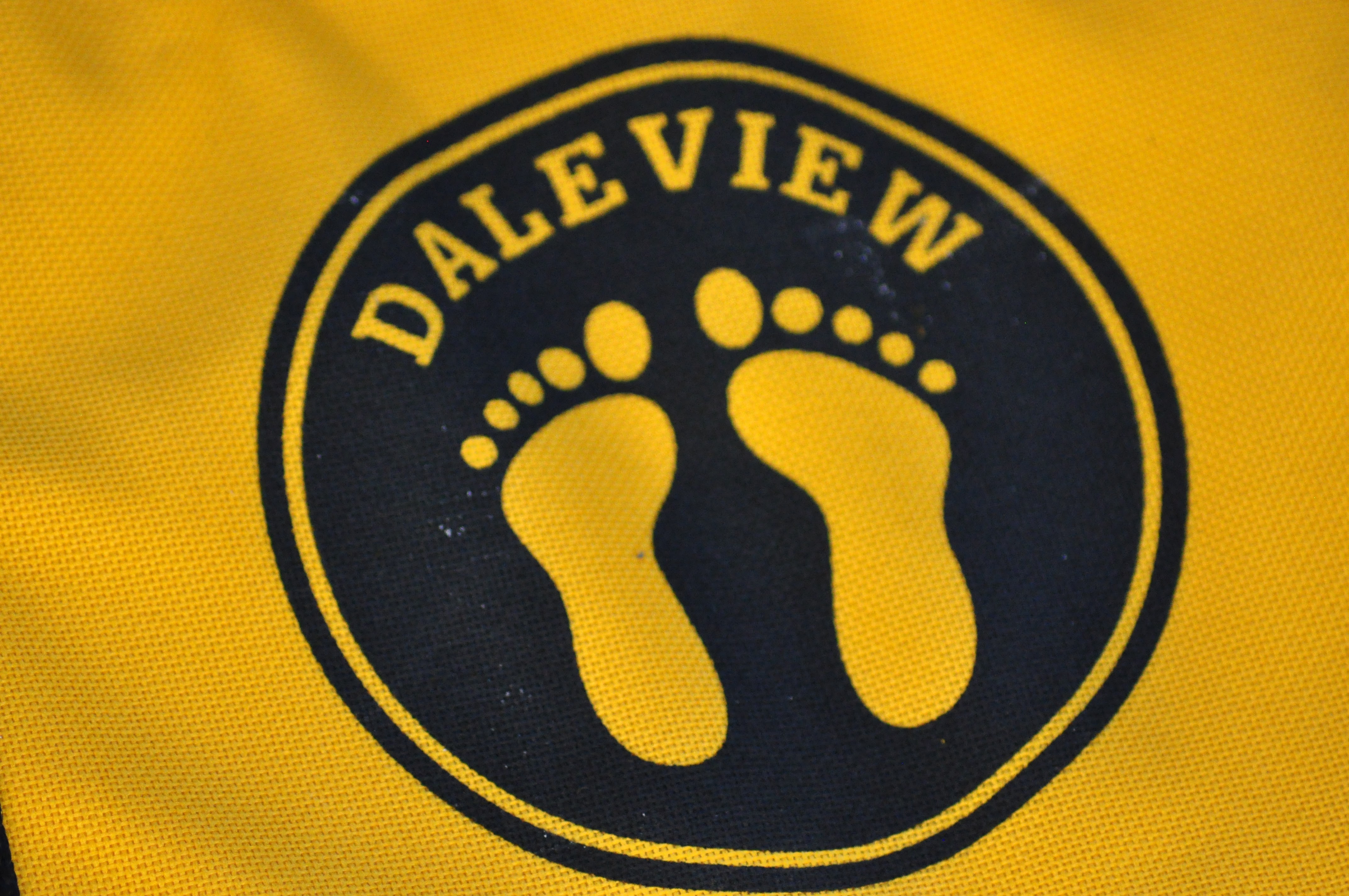 From the parking lot, I see the yellow and black flags strung across the blue water, the yellow and black lane ropes, the wooden pool house. My three-year-old steps on the yellow painted feet parading down the drive as we walk down the hill. The summer sounds of Daleview fill the air: laughter and yelling, occasionally a coach’s voice calling out drills, the splash of water as swimmers dive in. The scent of chlorine and sunscreen hits me as I walk out of the locker room onto the deck. I squint in the sun and pause for just a moment. Looking around me, I think of what another parent told me when I asked her what she loves most about Daleview: “I feel my blood pressure drop whenever I walk down the hill to the pool.” Another added, “It’s my happy place.”

I know I’m not the only Daleview parent who has this connection with the pool. What is it about Daleview that pulls us in? When I talk with other parents about the pool, the same words keep coming up: tradition, family, community. As one parent explained, “Daleview is the rhythm of our summer from the countdown and excitement of opening day to swim team practices and meets that seem like they’ll never end to those last dog days of August when you just want to savor the final moments before you stack the chairs up for the long winter ahead.”

But it’s not just the kids.  As one parent explains, eyes lighting up, “As soon as I arrive at the pool my kids are happy and will easily find friends to play with. They have a sense of pride for the team I don’t always see from my kids. They love their schools, but they really love Daleview and the Feet. It’s a commonality they both have and one of the few things they talk about together.”

At the end of my oldest daughter’s first meet, she swam in the graduated relay. We were new to swimming and overwhelmed with it all. As she raced down the lane, the team cheered her on. My husband and I stood on the hill, watching with a sort of awe. He turned to me, with the hint of tears in his eyes (which he now denies), and said, “I had no idea she could swim like that.” Later, talking with another parent about our reaction, she responded, “That’s Daleview. Everyone cries at some point.”

The more I talk to other parents about it, the more I discover the truth of that statement. A mom who swam as a kid tells me about her moment: “My son first did pre-team when he was seven. When we came to our first meet for a kickboard race, they played the National Anthem. I was just overcome with weepy emotion, remembering my own summer swim team days (though we had neither National Anthem nor kickboard races to start). Then the first races of the meet started and I saw the 12&under girls swim IM. I had tears spilling over. I had not thought about swim team in years and it brought back such strong and happy memories. And I am so glad my kids are experiencing this. I hope when they are grown they will join a pool and pass it down to their kids, too.”

On Friday morning practices, we have Big Foot/Little Foot. After the bigs practice, they pair off with their littles and for the next half hour, the bigs coach the littles: in the well a big teaches a little to dive, in another lane a big gives a little tips on flip turns. The parent of a graduating big explains, “Big Foot/Little Foot exemplifies the best of Daleview. There, the very youngest swimmers are groomed by the older swimmers to grow up and care for the young, just as they were once cared for by their towering, older teammates.”

Ask any parent and they’ll tell you, Daleview is about more than just swimming: “One summer my kids created a giant God’s Eye at Daleview Camp. My daughter came up with the idea and pitched it with the intention of beating the record in Guinness Book of World Records. They actually beat the record, but I don’t think anyone ever followed through and sent the photos in. But, seeing everyone get so excited about the idea and take turns throughout the entire summer working on it was very cool to watch.”

What makes Daleview special, what makes it our “happy place,” is that while the team is clearly focused on swimming — it is a swim team after all – it also embraces tradition, community, and family. We teach our kids how to swim and to compete, but also how to be a team: “A few years ago my son was in a triathlon up in Maine. Most kids complete the race in teams, but my son and one other boy, who is a bit younger, decided to race individually. My son finished the race without a problem. But the other boy had a hard time.

We waited and waited for him to come out of the woods to finish the last stretch of the run along the beach.  When he finally appeared, he was in tears. He had gotten turned around on the running course.  He was embarrassed at how long it had taken him to finish the race. He sat down, dejected, still in tears.  His mom and grandfather were trying to console him. My son went up to him with some candy and sat down next to him.  He shared the candy and told him what a good job he’d done. The boy perked up and managed to smile. His grandfather turned to me and said, ‘I’ve never seen anything like that. That was beautiful. Your son is a real mensch.’

I knew, however, that he wasn’t being a mensch. He was being a Foot. Taking the time to make a younger athlete feel better is something we see every Wednesday and Saturday at Daleview. He’d learned it from the older swim boys. We take it for granted. But it really is extraordinary.”

One thought on “The Feet Five – Week Five”