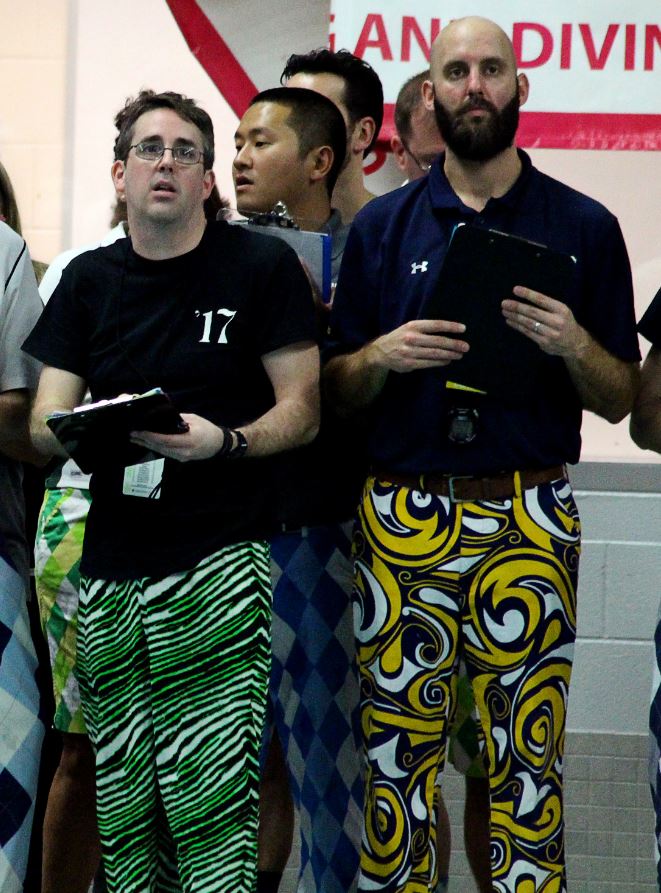 [Editor’s note:  This is the first in a series of stories that we will post highlighting coaches in the DMV area.  In addition to these articles, we invite readers to submit for publication your own stories about coaches in your corner of the DMV.]

Jamie Grimes and Jason Blanken share a lot in common.

And they both are beloved high school teachers with a zany side.

For example, last Friday was “Dress like Jamie” day at Walter Johnson (WJ) High School, where students came to school dressed in cowboy boots, Dad jeans, matching pink shirt and tie, nerd glasses and the like to celebrate the Lady Wildcats’ first place finish at the 2017 Washington Metropolitan Interscholastic Swimming and Diving Championships (Metros) and their head coach’s fashion style and first Metros championship in his 18 year tenure as head coach at WJ.  Grimes added to the fun by having the word “Champs” and a Wildcat paw print shaved into his spiked hair.

Blanken also steered his Bethesda-Chevy Chase (BCC) high school swim/dive team to its best result in years. The Baron’s combined boys/girls team finished 5th overall at Metros, and the boys’ and girls’ teams each finished among the top 10 teams for the 2nd year in a row. 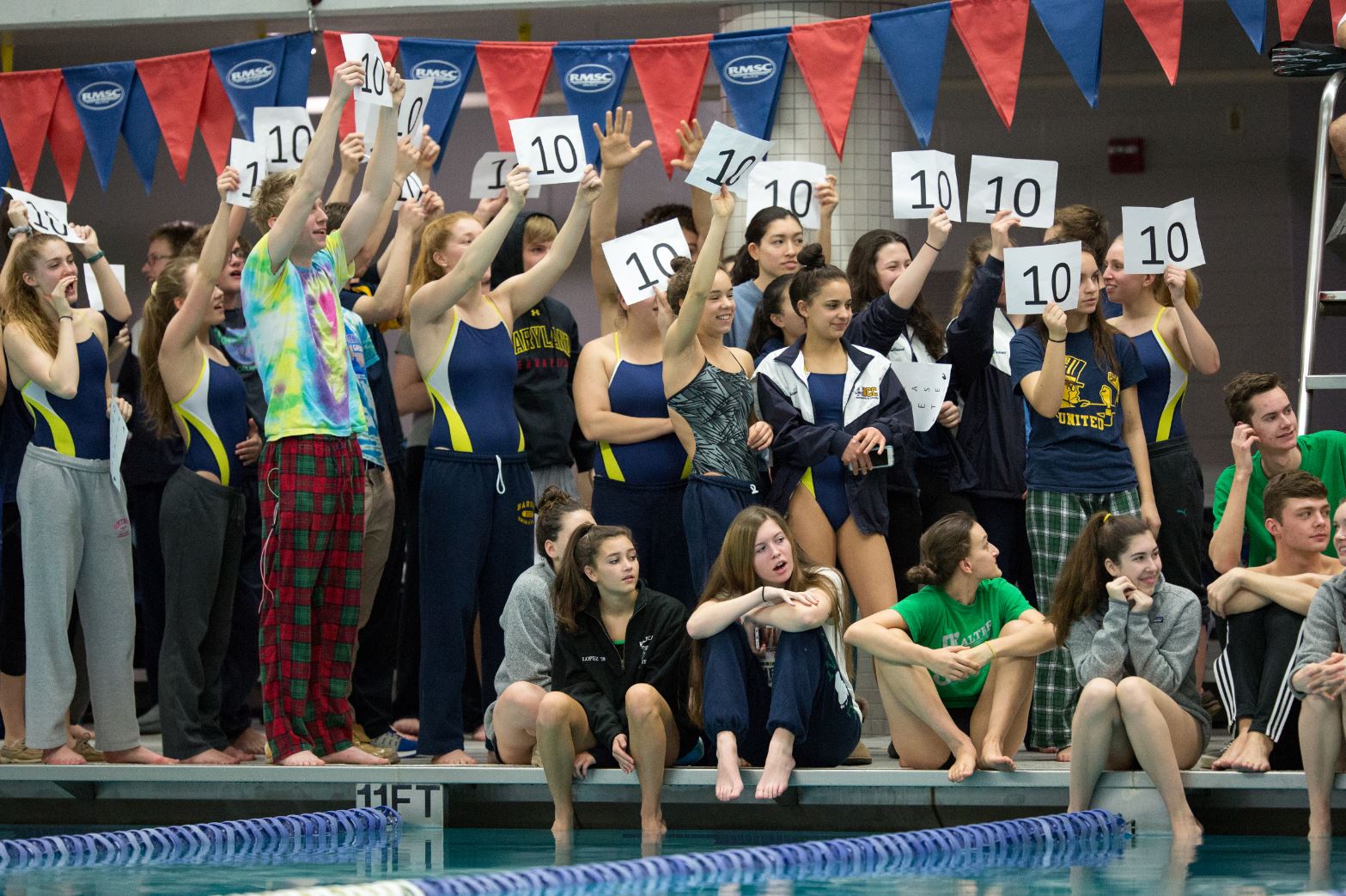 And Blanken isn’t afraid to yuk it up either.  Beyond standing in blue and yellow swirly pants next to Grimes during Metros and usually being the loudest coach/cheerleader on deck for the swimmers, he’s been known to yell “10!” whenever BCC divers were up, hoping that the judges would give them perfect scores just to make him stop.  This year, Jason made laminated ’10’ cards for the swimmers to hold up during the diving portion of the meets.

Blanken also likes to joke about how ‘old’ Grimes is.  So, when one of their RMSC swimmers thought the two were the same age, Grimes was in a curiously good mood for days.

But it’s not all games and giggles with these two.

Grimes qualified for the Olympic Trials in 2000 and 2004 in the 1500 meter freestyle, finishing 5th in 2000.  At the University of Virginia, he earned first-team All-American honors in the 1,500 freestyle with a 6th place finish in the NCAA championships in 2000.  He also was a first-team CSCAA Academic All-American and was named to the ACC Academic Honor Roll.

But while Grimes college career ended well, it didn’t start easy.  Although UVa admitted him to the school to swim, they wouldn’t give him a scholarship, making him earn it.   Motivated, he 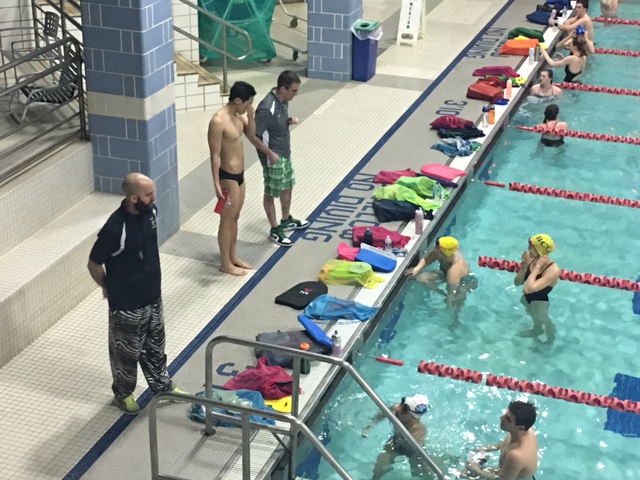 worked hard and qualified for NCAA’s in the 1650 freestyle as a freshman, placing 17th and earning a scholarship from the school.  Little wonder he earned UVa’s Hardest Worker Award and was a team captain.

On top of his coaching at WJ and RMSC, Grimes has taught science at WJ since 2003 and heads the school’s Advanced Curriculum for Excellence in Science (ACES) Scholars Program.

Blanken also teaches high school, using his B.S. in Family Sciences from the University of Maryland – College Park (2007) and M.A. in Special Education from George Washington University (2013) to teach special education/math at Northwest High School in Germantown, MD.  Jason has taught special education and/or math in other parts of Montgomery County, too, including WJ, Quince Orchard High School, Earle B. Wood Middle School and Hyattsville Elementary School. And he is the head coach of the JV Girls Lacrosse team at Winston Churchill High School and MCSL’s River Falls Swim Club.

In the pool, Blanken was named Washington Post All-Met Honorable Mention as a senior at Paint Branch High School before swimming for the University of Maryland, specializing in backstroke.

But given all their accomplishments, what’s perhaps most notable about these two is the example they set for their students and swimmers, including the enthusiam and professionalism they exude as well as the friendship and sportmanship they exhibit with each other whether coaching together at RMSC or coaching against each other at WJ and BCC.

Jamie and Jason, congratulations on the successful year so far.