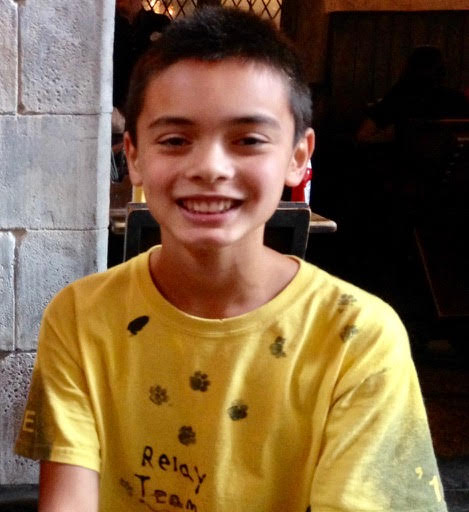 Editor’s note:  Emanuel Rouvelas is a 12 year old 6th grader at Haycock Elementary School in Falls Church, Virginia, who swims for the York Swim Club (year-round) and NVSL’s Tuckahoe Tigers.  Emanuel, curious how today’s elite swimmers fared in the pool when they were younger, analyzed the times of a group of 2016 U.S. Olympic Trials finalists to determine what percentage of them were elite when they were younger.  Reach for the Wall thanks Emanuel for submitting this paper to us for publication.

This paper is intended to apply concepts from math and science classes.  It tries to answer a question that I have had: Were Olympic athletes elite when they were my age?

In the chart below, the eight people were the finalists in the 100 meter fly in the 2016 Trials. The graph shows their times at younger ages using information from the USA Swimming website.

The three dotted lines are the USA Swimming age group standards. While the actual formula is complicated, in practical terms, an AAAA ranking would rank a swimmer in roughly the top 110-to-160 in the nation for his/her age group, depending on the event and age.  An AAA swimmer would rank in the top 400-to-600, and an AA in the top 1000-to-1400 nationwide. 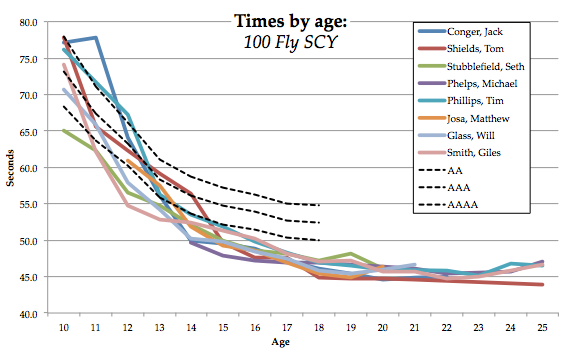 By age 15, every swimmer on the chart above had a AAAA time, but at age 12, many of them had AAA and AA. The table below shows the distribution. 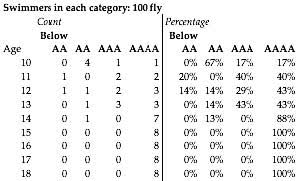 Data and Analysis for Backstroke

Similarly, another analysis was done for backstroke. The chart below shows the finalists in the 100 meter backstroke in last year’s Olympic trials. 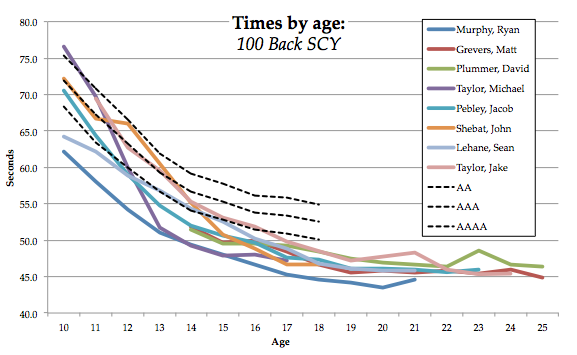 The table below shows how fast each finalist was by their age.  *Note that not everyone had a time at age 18. 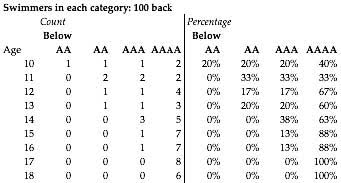 The distribution between the two graphs is similar, except the 100 fly finalists were all AAAA by age 15 while it took the 100 back finalists until they were 17.

Averaging the two events together results in the chart below. 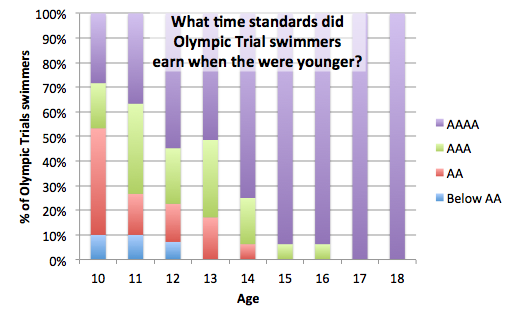 At my age (11-12), half or more of the swimmers were below AAAA: still strong swimmers, but not elite.  By age 14, they started to sift out and by age 15, almost all were elite.

This analysis covers two events.  More events would bring more data points and have more accuracy.  Nonetheless, these results suggest that you don’t have to be elite through your early teen years to go to Olympic Trials but must be by age 17.

6 thoughts on “Were Olympic Athletes Elite When They Were My Age?”