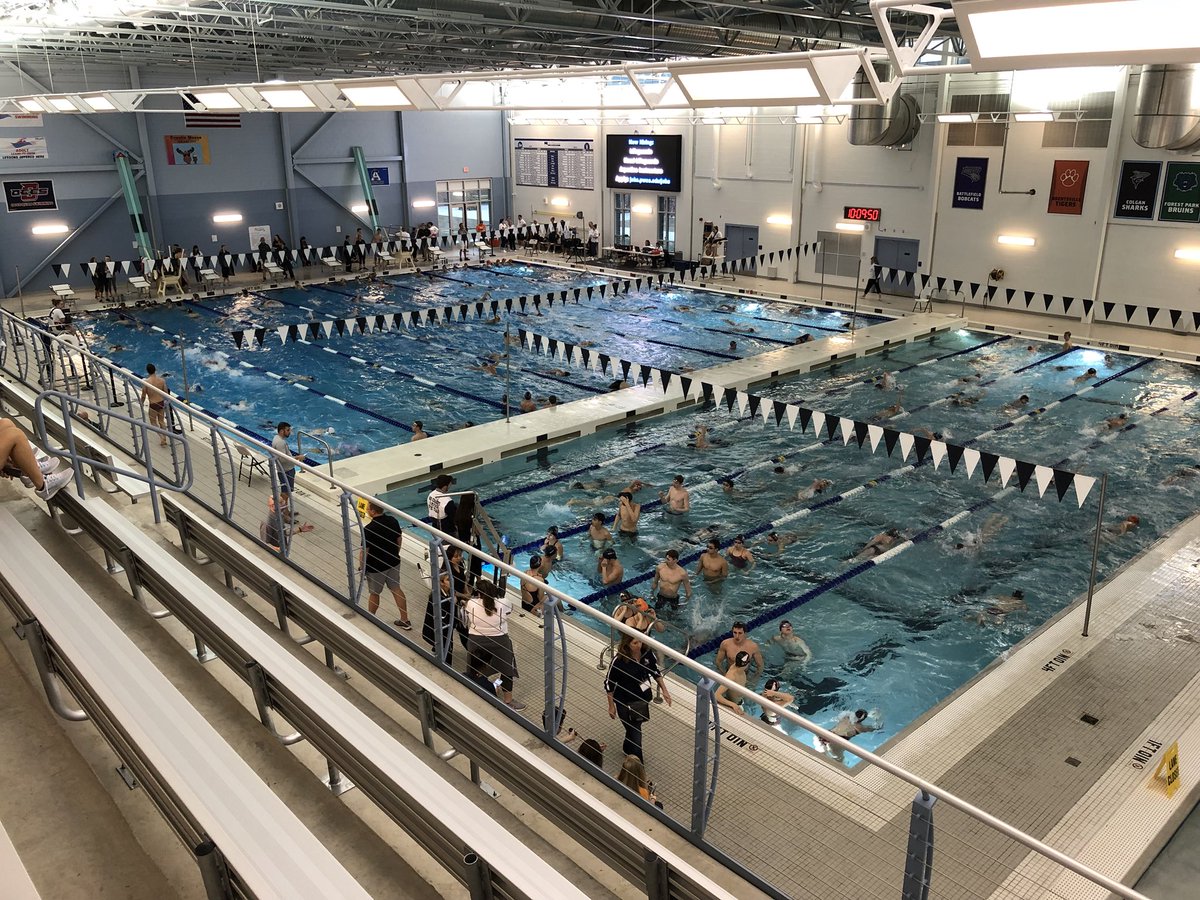 High school swimming enters its second weekend of Championship meets, with the Washington Metropolitan Prep School Swimming & Diving League (WMPSSDL) Championship meet: 2018 Psych Sheet, Virginia High School League (VHSL) region meets (Region 5-C swam today!) and MCPS Divisional Championship meets. We will do our best to keep up with the results and post as soon as we get them. If you would like to report results, send us an email: operations@reachforthewall.org

Below are short descriptions of the MCPS championship meets and the podcast where the MCPS meet structure was discussed:

“Divisionals” is the first of the “championship” meets.  Each division (e.g., Division I, II, III), which typically has 6 or 7 teams, sends its top swimmers to compete against one another (e.g., similar to how, say Division A in the Montgomery County Swim League sends its top swimmers to its “divisional meet” each summer).  Each swimmer may swim two individual events and two relays OR one individual event and three relays at Divisionals.

“Metros” is held shortly after Divisionals (February 7-10 at Germantown Indoor Swim Center).  While

Metros is not an MCPS meet, most MCPS and private high school swimmers and divers consider it the most fun and important meet in the high school season. Eligibility requirements are slightly different – entries will only be accepted from invited high school or prep school teams in the Washington D.C. metro area that are members of the Maryland Public Secondary Schools Athletic Association (MPSSAA) or have been approved by the MPSSAA as non-member schools or are members of other high school athletic associations (e.g., VHSL, DCIAA).   All swimming events are run as Trials & Finals, and the top 20 competitors will return for finals. Points for places 1 – 10 are awarded on the basis of the results of the Championship Final Heat.  A Consolation Heat will be swum before the Championship Final Heat to determine places 11 – 20.

There is an overlap of 3A at the regional and state level.  If any RFTW readers have insight as to why this is, please let us know!

Regions only allows a maximum of 2 competitors from a given school to compete in any individual event.  Their times must be documented times from a regularly scheduled swim meet in 2017-2018 (i.e., based upon a minimum of two averaged watch times, or electronic timing). Each team also will submit its one automatic relay entry with up to 8 swimmers per relay event and the documented seed-time.  “No time” entries will not be accepted.  Regionals are held Feb. 15-17, 2018 at pools throughout the state. Full list of sites and dates

Qualifying for States also is a bit tricky.  The States meet is seeded from the results of Regions, based on time.   In addition to the top 3 individuals and top 3 relay teams advancing from their region to the States meet, the individual competitors or relay teams who, in the finals of their Regions meet, are among the top 12 times statewide will qualify for the States meet (excluding automatic qualifiers).  In the event a tie for 24th, both individuals will be included.

The 2018 States championship meets will be held February 23-24 at the University of Maryland, College Park Eppley Recreation Center.

Of these 4 MCPS championship meets, 2 are swum against only MCPS teams (Divisionals and Regions), 1 meet is the only time private and public schools race each other (Metros) and 1 is a state-wide meet (Maryland State Champs).  Of these 4 meets, 3 are USA-Swimming sanctioned meets (Metros, Regions, States).   These are the only 3 meets within the MCPS high school swim season where swimmer times are recognized by USA-Swimming.  Metros also is sanctioned by the National Federation of State High School Athletic Associations through Montgomery County Public Schools.  States and Regions are governed by MPSSAA Swimming.

To be eligible for postseason championship meets, athletes must compete in a minimum of 6 out of 7 dual meets (or 5 out of 6, as applicable), unless in the judgment of the coach and the athletic director, the swimmer/diver was legitimately absent due to illness, testing or other unavoidable reasons.

As always, high school swimming relies heavily on the weather gods being kind to them.  Let us hope for a kind winter and meets being held on time.  Best of luck to you and your high school swimmers!