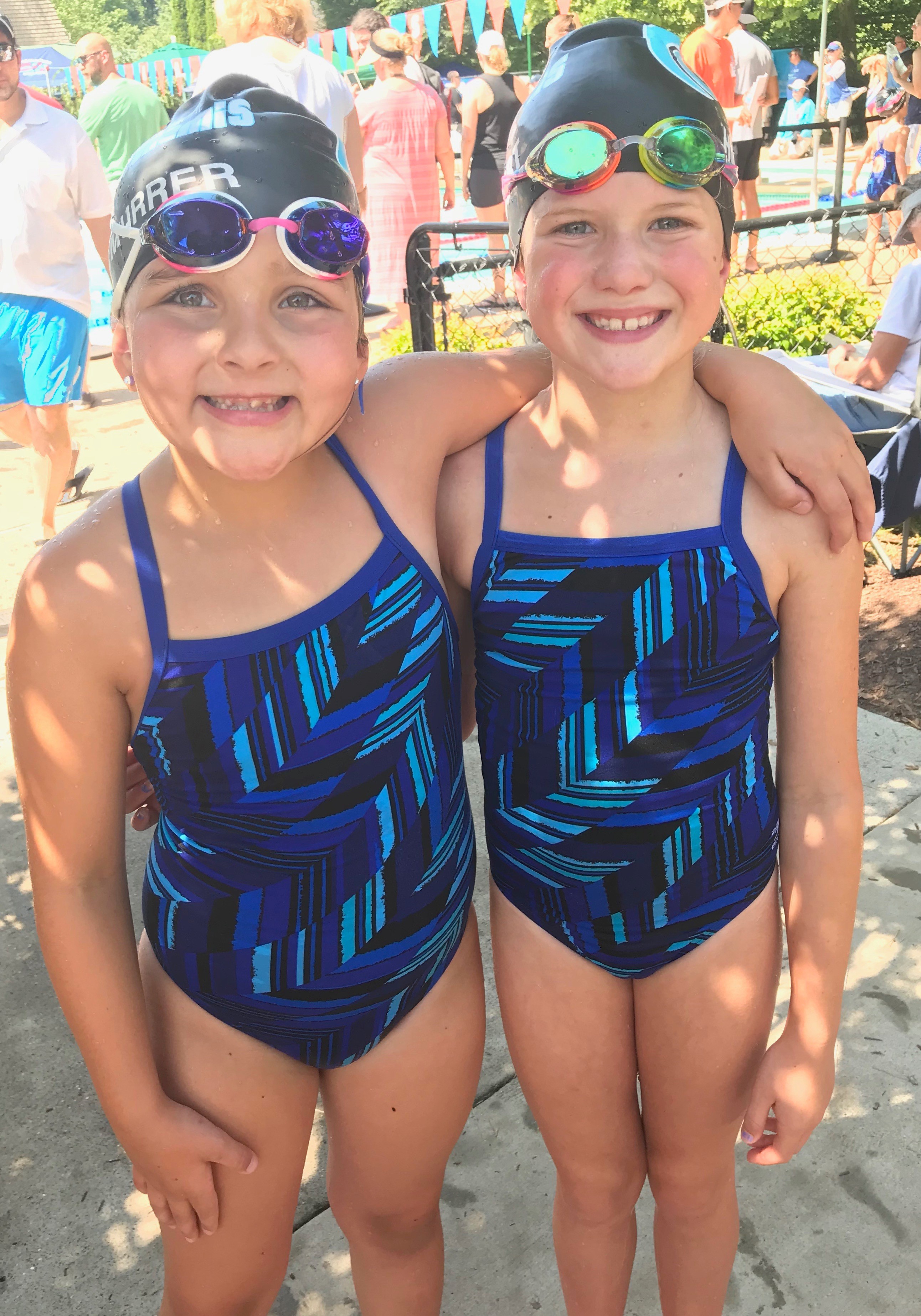 Featured Image: Abby McMurrer and Abby Hubert, two of the teammates who outperformed on the Piedmont 8&U Free Relay Team, share a big smile after the race.

The Piedmont Tsunamis kept their undefeated season alive on Saturday morning by beating their Blue Division rivals, the Braemar Blasters.  While blazing hot conditions throughout the region challenged swimmers from both teams to improve on their personal best times, the Tsunamis responded with determination and consistency to advance to 3-0 on the year with a 2741 v 2548 win.

The Tsunamis flooded the morning relay events with better-than-expected combined efforts, racking up top honors in 8 of 11 opening matches.  Here, the only Piedmont team record of the day fell during the Boys 9-10 100 Meter Medley.  Led by Mark Edwards, Christopher DeVito, Parker Treadwell and Joseph Coleman, the 1:13.4 time bettered the previous record mark by over a half second, set earlier in the 2018 season.

With a foundational lead established, the Tsunamis methodically added to the score separation through individual swims.  As a unit, the 15-18 Boys were almost unstoppable for Piedmont during the day as they captured a remarkable 76% of all top 10 spots from individual races.  Blue ribbon finishes were also solid regardless of age group, with highest marks for the Tsunamis in over half of the total contests.  First place honors for Piedmont were taken by (PWSL top overall times also noted by number in parenthesis):  Christian Mulroe (1), Abby Hubert, Elaine Hong, Theo Drescher, Camille Spink (1), Henry Radzikowski, Anna Dzouenko, Maddie Richardson, Matthew Pianoto (1), Blake Hayden (1), Christopher DeVito (1), Charlotte Hannam, Emma Hannam (1), Eric Liao, Katherine Diatchenko, and Kenzie Rutledge.

The last leg of the meet was capped by dramatic final touches during relay events.  The most notable of these gains featured a Tsunami upset victory by the Girls 8 and Under Freestyle crew. Swimmers Abby McMurrer, Adelina Chehadeh, Sophia Malinowski, and Abby Hubert outpaced their projected ranking to come in first overall, helping to seal the Piedmont victory during the closely-held finishing races.

Piedmont travels once again next Saturday to face another tough division rival, the Sudley Seahorses.  Here, the two undefeated teams will battle for top marks on regular season wins, and Blue Division leadership, as the second half of the PWSL season begins.