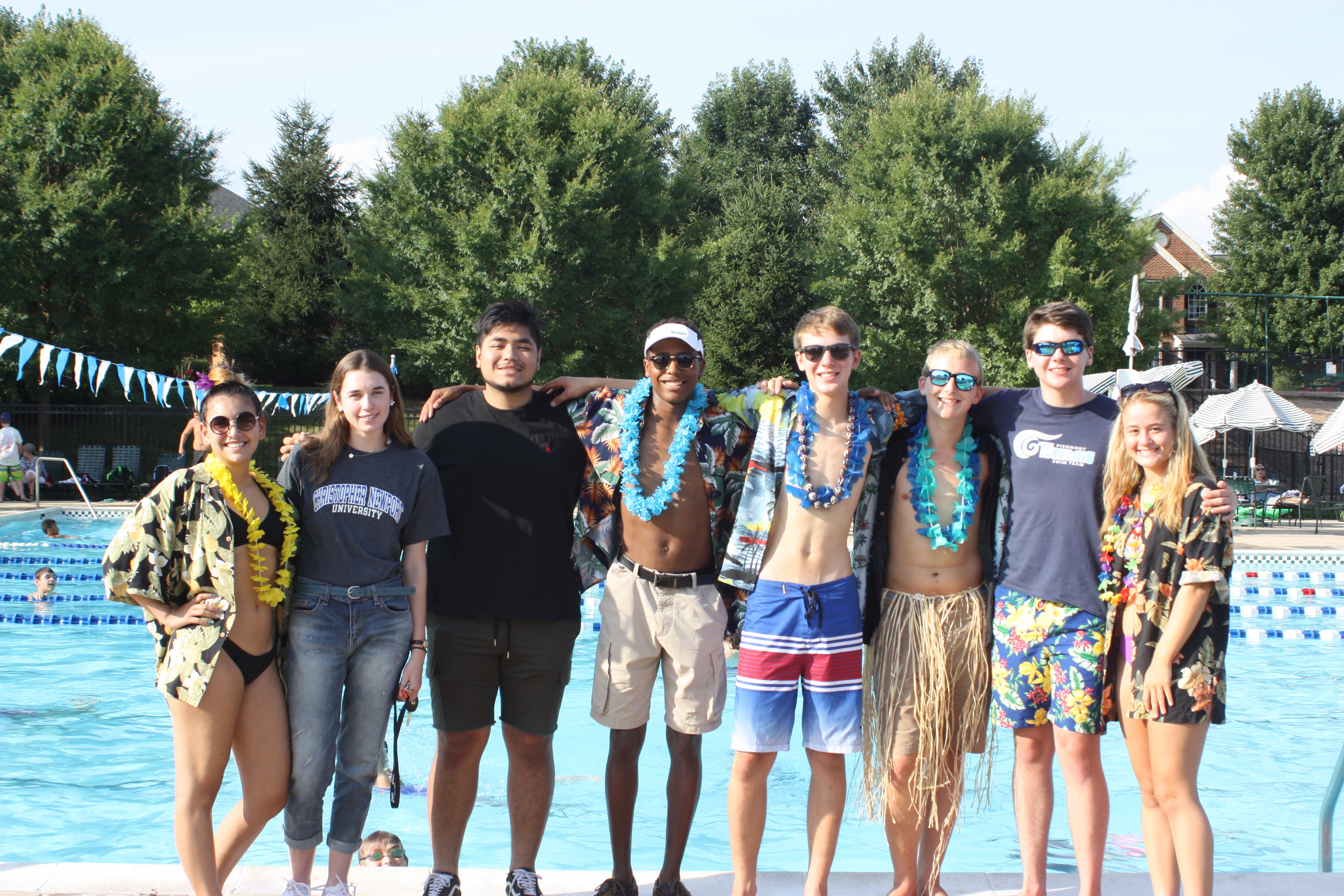 Lead Photo: Many of the graduating Piedmont seniors show their Tsunami spirit before the meet. Pictured are Alex Segura, Meghan Walters, Piero Untiveros, Julian Williams, Jeremy Kochan, Noah McMurrer, Parker Spink and Livi Morrow.
On Saturday, the Piedmont Tsunamis claimed a home pool victory to remain the only undefeated team in PWSL by upending the Bridlewood Bridlewaves in a competitive swim day. The win marks the end of a three-meet gauntlet of victories for the Tsunamis, having successfully faced both their Blue Division rivals, along with the only other undefeated club in the BWaves. While the final regular season home swim was tightly contested at various stages of the morning, Piedmont finished with a 184 point margin of victory in a 2735 v. 2551 outcome.
Piedmont came strong out of the gates, clearing both 15-18 Freestyle relays and taking 7 out of 11 opening team matches in total (four of which were top times in the county). Here, the only Tsunami team relay record on the day went down to the 9-10 Boys in the Medley event. The combined efforts of Mark Edwards, Christopher DeVito, Joseph Coleman and Patrick Hooper, Jr. resulted in trimming a June record mark by .21 seconds, clocking in at a new low of 1:13.19.
The Tsunamis methodically delivered throughout individual events, having been closely challenged to low double-digit spreads at various points of the morning. Ultimately, the Piedmont club would pace at a season-high of 40% faster times versus personal bests on the year, while reigning in 56% of all top-finishing marks. Blue ribbon honors for Piedmont were taken by (PWSL top overall times also noted by number in parenthesis): Christian Mulroe (2), Theo Drescher, Henry Radzikowski (1), Christopher DeVito (1), Charlotte Hannam, Matthew Pianoto (1), Camille Spink (2), Katherine Diatchenko, Mikaylee Jenkins, Blake Hayden (1), Adelina Chehadeh, Maddie Richardson, Alex Huang, Emma Hannam (1), Preston Borden, and Morgan Furlong,
While the BWaves came back aggressively in freestyle relays to take all but the final team matchup, total squad depth in head-to-head contests were the deciding factor for the entire meet. Here, the Tsunamis secured 54% of all top 10 finishes – ultimately providing a stable cushion of points to claim victory on the day.
The Tsunami win was symbolically important as well, heralding the last splash at home for several of the team’s graduating seniors. Swimmers, coaches and leaders moving on include: Payton Boyer, Willem Drescher, Morgan Furlong, Evan Hackler, Jeremy Kochan, Noah McMurrer, Olivia Morrow, Alex Segura, Parker Spink, Piero Untiveros, Meghan Walters, and Julian Williams. The largest graduating senior class in Piedmont history capped each of their final performances with crowd appreciation and applause for their team contributions as they soon transition to Tsunami “alumni status”.


In meets commanding significantly faster overall swims for most of the league, no PWSL records were to fall on Saturday. That said, Piedmont had several team bests surrender to rising swimmers. The star of the day was Christopher DeVito who tallied two team-leading performances for the 9-10 Boys. DeVito made his mark early, toppling a four year old record in the 100 IM by almost 1.3 seconds to 1:23.15. DeVito had more in the tank on later swims as well, shaving almost a half second off his record mark from earlier this year in the Boys 9-10 Breast – setting the new bar at 43.07. Additionally, the oldest standing time in the 9-10 Boys age group fell dramatically to Joseph D. Coleman. Here, in the 9-10 Fly, Coleman rewrote the books on a seven year old accomplishment originally set by now-rising senior Luke DeVore – coming in with the first “sub-17” score ever for the group at 16.95 seconds.


Next Saturday, the Piedmont Tsunamis travel south, taking “Tent City” on the road for the last time this season as they face the Ridgewood Barracudas. Here, Piedmont strives to close out their first “perfect” regular season in Blue Division history before they host the final divisional matchups later in the month.