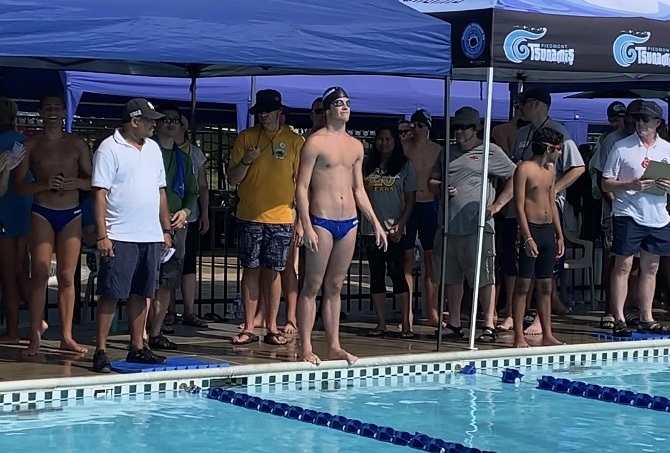 The most scorching temperatures of the summer would not be daunting enough to squash the enthusiasm and determination of the Piedmont Tsunami swim team on Saturday, as the club methodically delivered another unblemished regular season record through the defeat of the Kingsbrooke Sea Lions.  Swimming in front of a home crowd, while braving heat indexes as high as 106 degrees, the 2959.5 v 2331.5 victory keeps Piedmont perfect atop the PWSL Blue Division, and extends their win streak from the beginning of last season to 12-0.

Piedmont’s victory in the penultimate contest of the year could best be described as “balanced” on the day, as the team maintained a solid lead through each stage of the meet.  The Tsunamis opened by landing 8 of 11 early relay wins, before marching forward with 63% of first place awards in individual swims.  Finally, Piedmont capped the morning efforts by going 7 for 8 in the combined freestyle events, assuring their success.  Ultimately, five of the Tsunami relay teams would claim top marks in the week for the county.

The Piedmont win was symbolically important as well, heralding an emotional “Last Splash” at home for several of the team’s graduating seniors.  Swimmers, coaches and leaders moving on include:  Sebbie Borden, Lindsay Brandt, Luke DeVore, Hayden Goertz, Tyler Michael, Brice Nelson, Rhys Seaman, Mia Tremblay, and Torii Waisanen.  The graduating senior class capped each of their final performances with crowd appreciation and applause for their team contributions as they soon transition to Tsunami “alumni status”.

Piedmont will look to benefit from their season-long momentum next Saturday, as they defend the PWSL championship crown in the Blue Division finals against the Sudley Seahorses and the Braemar Blasters.  Taking Tent City on the road to the Sudley hosted event, the Tsunamis will attempt a repeat of top league honors in what promises to be another tightly challenged contest of leading swim clubs in the region.