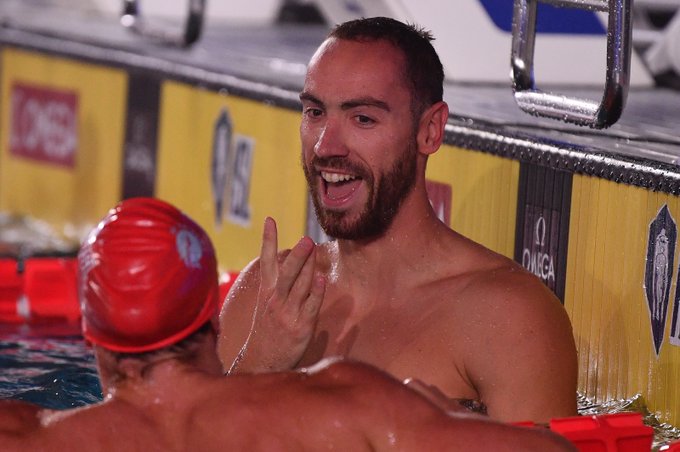 By Rich House; All photos and videos courtesy of ISL and DC Trident

The ISL went to Naples over the weekend for the second installment of quad meets that featured DC Trident, Cali Condors, Energy Standard and home team Aqua Centurions. The atmosphere was electric as the Italian fans showed their love for the home team as well as their superstars Federica Pellegrini and Nicolo Martinenghi. In Indianapolis, Pellegrini participated on relay events, whereas in Naples she took on the relays plus the 50, 100 and 200 freestyle (her signature event). While she didn’t finish better than 4th in her individual events, her presence got the crowd into a frenzy, while they chanted ‘Fede’, ‘Fede’ before and during her races. Meanwhile on day 1, her Italian teammate Nicolo Martinenghi captured a win in both the 50 breaststroke the 400 medley relay and a 4th place in the 200 Breaststroke, and on day 2 he raced to 2nd place in the 100 breaststroke, piling up big points for the Aqua Centurions.

The biggest buzz coming into the weekend was the debut of Caeleb Dressel, swimming for the Cali Condors. On day 1, Caeleb swam 2 individual events (100 butterfly, 50 freestyle) and two relays (400 medley, 400 free). In his first event, the 100 butterfly, Chad Le Clos took out the first 50 ahead of the field and while Caeleb battled fiercely, he came up .01 short of the victory as Chad kept his head down and touched first.

The 50 freestyle was a showdown between last week’s winner Florent Manaudou and Dressel. This time Dressel prevailed, touching ahead of Manaudou 20.64 to 20.72.

The last notable swim for Caeleb on Day 1 was his anchor on the 400 free relay. His Cali Condors team was in 4th position when he entered the water, Caeleb outswam his competitors by over a second, splitting 45.40 to capture 2nd for the Condors.

The DC Trident were in a battle with the Aqua Centurions from the outset to earn the precious 3rd place team points. The Aqua Centurions thrilled the crowd with great swims early, but the DC Trident’s Jay Litherland broke through in the 400 IM, winning by over 1.5 seconds in 4:06.35. The other bright spot for the Trident was Siobhan Haughey, who also prevailed in the women’s 200 freestyle, taking the race in 1:52.01 touching .89 ahead of Cali Condors Ariana Titmus.

The Aqua Centurions struck back in the next event, men’s 200 freestyle, where Breno Correia charged from 7th place (at the 150) to take the win in 1:43.56, by .02! DC Trident’s Zane Grothe was in the mix the whole race but got his hand on the wall 5th .54 behind in 1:44.10. Jeremy Stravius (lead photo) also had a good day for DC Trident, taking the victory in the 50 backstroke in 23.13 and 4th in the 100 butterfly. After day 1, the Aqua Centurions had an 11.5 point lead in the team standings for 3rd place while the Cali Condors were 7.5 points clear of Energy Standard for the overall lead.

Day 2 started off with Energy Standard teammates Sarah Sjostrom and Kayla Sanchez going 1-2 in the women’s 100 freestyle, with DC Trident Siobhan Haughey racing to 3rd. Caeleb Dressel picked up momentum for the Cali Condors with his win in the 100 freestyle, posting a 45.77, almost a full second ahead of the field. The Cali Condors kept rolling with Lilly King winning the 100 breaststroke and her teammate Molly Hannis finishing second. With that win, King has gone undefeated over the first two weeks of competition, sweeping the breaststroke events as well as helping her team to wins in the 400 medley relay(splitting 1:03.78 in Indianapolis, and 1:03.74 in Naples). With Katie Ledecky on the sidelines this week, the DC Trident couldn’t duplicate the back-to-back wins in the 400 Freestyle as they did in Indianapolis, however Zane Grothe did his part! Grothe was in 3rd at the 300 and threw down a blazing 54.62 last 100 to finish in 3:41.03 ahead of the field by .35 seconds.

The Men’s 200 IM was again a nailbiter for DC Trident as Andrea Vazaios and Cali Condor Mitch Larkin battled for the top spot. Last week, Larkin got the win by .12 and this week they tied, both swimming 1:53.44!!

In the team standings, DC Trident and Aqua Centurions were battling for third place, and DC Trident held a 3.5-point advantage heading into the mixed 100 free relay. The Aqua Centurions finished ahead of DC, scoring 12 points to DC’s 10, and outscored DC in the women’s 200 butterfly 10-8, putting them ahead of DC by .5 points. DC clawed back in the men’s 200 butterfly with Andreas Vazaios and Zach Harting finishing 2nd and 5th to the Aqua Centurions 3rd and 6th (11-9). That put DC up by 1.5 going into the skins races. In the women’s showdown, Siobhan Haughey put together a great first round, swimming 24.14 to advance (in 2nd place), while teammate Madison Kennedy finished 5th (4 points), just missing round 2. The Aqua Centurions failed to advance any swimmers, finishing 7th and 8th, earning 3 points. Siobhan swam a strong round 2 but couldn’t repeat her time or placing, finishing in 4th to garner 10 points for DC. This put DC in the lead 319-308.5 after the women’s skins race.

In the final event of the meet, the Aqua Centurions had their top swimmer, Kristian Gkolomeev, advance to round 2 while DC Trident swimmers placed 7th and 8th. In the 2nd round, Gkolomeev raced to 4th place, earning 10 points and outscoring DC 13-3 in the race. That margin was just enough for DC to stay ahead of Aqua Centurion in the team race 321-320.5

DC Trident has the next two weeks off as the competition continues with the remaining 4 teams (NY Breakers, LA Current, Iron, and London Roar). This weekend the competition will be in in Texas and next week in Budapest (schedule). DC will need the US teams to finish 3rd and 4th in the next two competitions and DC will need to finish 2nd when they go head-to-head in College Park, November 16-17 in order to have a chance to participate in the finale in Las Vegas. As a reminder, the Top 2 US clubs and Top 2 European clubs in standings of club cumulative points after the 6 regular season matches, will advance to the Final Match.

We hope the Trident can #stayinthefight and advance after November!