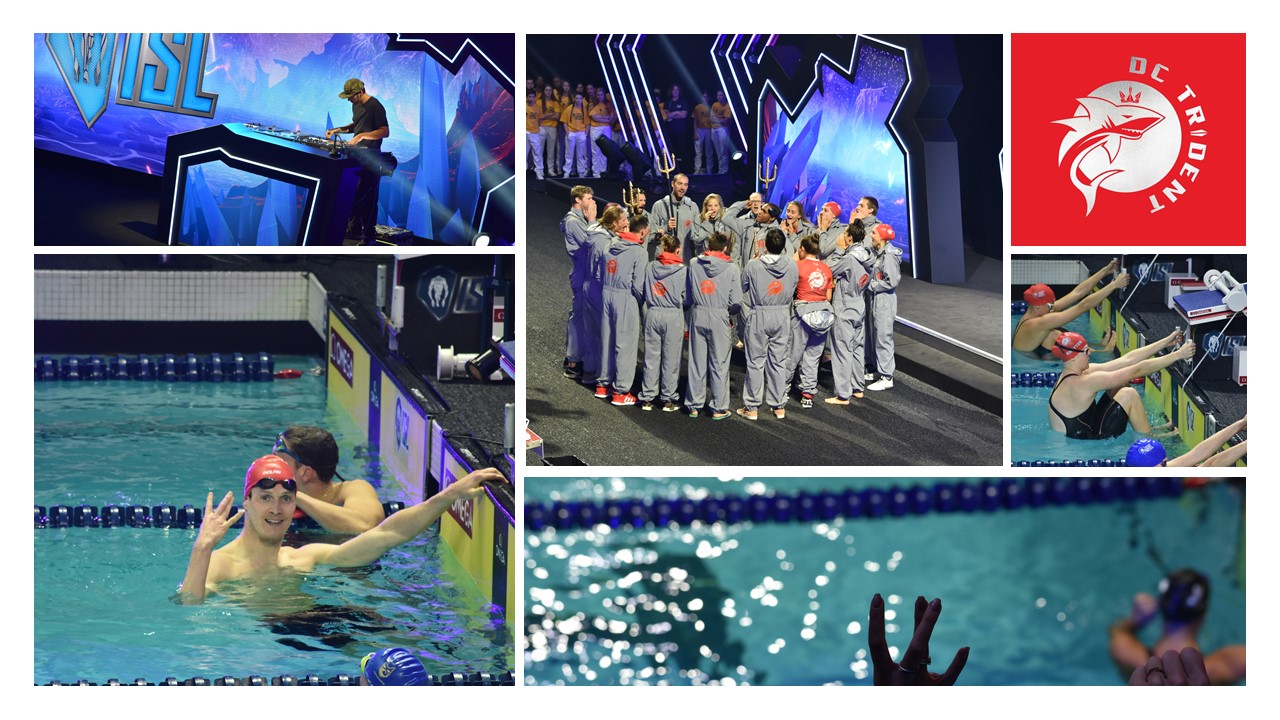 The show and spectacle of the ISL made its way to College Park the weekend of November 16-17 weekend & we were on hand to witness!

Prior to the meet we were able to speak with the General Managers from each team to get their input on their squads, the last minute roster changes, how they prepared for this met and what it would take to make it to Vegas for the grand finale. As a reminder, the ISL held 4 meets prior where teams earned points on their placement in each meet: 4pts. for 1st, 3pts. for 2nd, 2pts. for 3rd, and 1pt. for 4th. The ‘Derby’ meet for the US- based teams was held to determine which two will move on to the ‘championship’ meet being held December 20-21 at the Mandalay Bay Resort and Casino, Las Vegas. The competition will include the Cali Condors, LA Current from the US and the Energy Standard and the London Roar from the European clubs.

Going into the meet, the DC Trident had an outside shot at making the trip to Vegas as they sat 3rd in the standings (4 points), only 1 point out of 2nd behind the LA Current. After the first day of competition DC was trailing the group sitting in 4th, trailing the NY Breakers by 2.5 points and the LA Current (the team they would have to beat to go to Vegas) by 66.5 points. Both DC and the NY Breakers had to make some last minute roster maneuvers to fill in for swimmers that were ill or had scheduling conflicts. DC signed two-time Singaporean Olympian Ting Quah as well as Remedy Rule, who grew up south of DC in Waynesboro Va. The Derby meet was also a homecoming event for several swimmers that grew up or swam in the area for college:

Sunday DC came out fired up, and took vocitores in the women’s 100 freestyle, with Siobhan Haughey tying LA Current superstar Beryl Gastaldello, touching the wall in 51.81. The Trident followed up with 5th and 7th place finishes in the Men’s 100 free and a 5th and 8th in the women’s 100 breaststroke before Ian Finnerty blasted his way to victory in the Men’s 100 breaststroke. His time of 56.29 was a new American record, his second of the meet (he set the 50 Breaststroke record 25.99 on Day 1). The next victory came in the Men’s 400 Freestyle where Zane Grothe took it out fast and never looked back, winning in 3:40.73. Teammate Velimir Stjepanovic placed 3rd in that race, garnering key points for the DC Trident. After the Women’s Medley Relay, the DC Trident had a 3.5 point lead on the Breakers, but still trailed the LA Current by 83. At this point, the likelihood that DC would catch the LA Current was not a reality and the meet turned to a battle for first and third. The Cali Condors were in the lead behind individual wins by Caeleb Dressel in the 100 Free (45.62, just .07 off an American Record), Lily King in the 100 Breaststroke (1:03.00, .08 off an american Record), Hali Flickinger in the 400 Freestyle (a very exciting come from behind victory!) and a 1-3 finish in the Women’s Medley Relay. The Condors held a comfortable 26.5 margin over the LA Current with 11 events remaining.

DC Trident’s Andreas Vazaios thrilled the Trident crowd with a victory in the Men’s 200 IM touching in 1:52.95, almost a full second ahead of the field. (He also won this event in Naples, and was 2nd in Indianapolis). The Cali Condors and LA Current traded points in the next few events with the Condors taking 1-2 in the Women’s 200 IM, and Caeleb Dressel winning the Men’s 50 Butterfly in (another American Record time) 22.21. LA Current, Beryl Gastaldello, fired back with a win in the Women’s 50 Butterfly. In the ensuing race, the Men’s 100 Backstroke, LA Current Matt Grevers and newly acquired Shane Ryan went 1-2. In the post-meet interview, GM Lenny Krayzelburg commented that this race was the turning point for the LA Current team as they found the motivation to mount the comeback.

With 4 events remaining the Cali Condors lead shrunk, but still were 20.5 points clear for 1st and the DC Trident maintained a lead on the NY Breakers for third place by 2.5 points.

In the Women’s 200 Butterfly, Hali Flickinger got the victory for Cali Condors with her teammate Kelsi Dahlia capturing 4th, outscoring LA 14-7. LA came back in the Men’s 200 Butterfly, with Tom Shields and Chase Kalisz going 1-2, outscoring Cali 16-3, reducing Cali Condor’s lead to 14 points. The final event of the day was the Skins races, where the top points are tripled. Beryl Gastaldello continued her dominance in the weekend, by taking 1st in each round and capturing 27 points for LA. Margo Geer finished 5th, adding 4 more to the LA Current total. Cali Condors Kasia Wasick made it out of the 1st round, but finished 4th in the second round, earning 10 points, while her teammate Olivia Smoliga finished 8th, earning 1 point. At the end of the Women’s Skins race, LA Current outscored Cali 31-11, putting them in the lead (for the first time over the weekend) by 6 points. DC Trident Siobhan Haughey finished 2nd in the skins race, garnering 21 points, while her teammate Madison Kennedy finished 6th. DC Trident outscored the Breakers 24-14, maintaining a margin for 3rd place in the team standings.

The Men’s Skins race pitted Cali Condors Caeleb Dressel and Bowe Becker against LA Current Michael Chadwick and Ryan Held to determine the overall team title. In the first round, Michael Andrew from NY Breakers took the top spot, followed by Dressel, then Chadwick and Held. In round 2, Dressel took the top spot, followed by Chadwick. Given this result- the worst LA could do is tie Cali for points, which sealed the overall team title for LA!! Caeleb went on to win the event in 21.35, finishing 1.1 seconds ahead of the exhausted Chadwick. Cali earned 30 points, and LA 31. The final team standings were:

The inaugural season ended with this meet for both the DC trident and NY Breakers. Both teams showed their appreciation as they cheered the fans, threw caps, goggles, and T-shirts to the stands close behind their benches.

As fans and participants in the sport, whether through our children competing, masters swimming, volunteering as officials and timers at meets, or just as spectators, ‘We’ marveled at this event. The atmosphere was rivaled only by US Olympic Trials, and the swimmers were awesome after their events, their attitudes and glowing words in post-race interviews. The ‘just have fun’ theme permeated the venue & we saw some spectacular performances- 4 American Records were set over the weekend! Thank you ISL for injecting life into the dual meet format & we look forward to the expansion of the league and events to come in 2020!