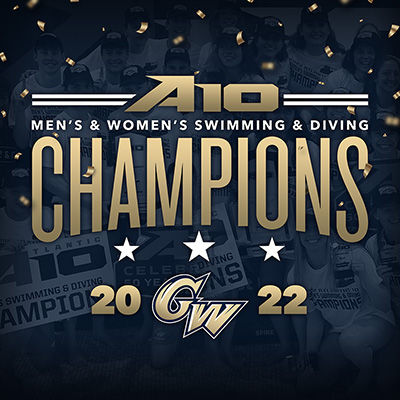 GENEVA, Ohio – GW men’s swimming and diving completed its dominant run to another Atlantic 10 title on Saturday, adding nine more medals, including four golds, to secure the crown for the second straight season and fifth time in six years.Under A-10 Coach of the Year Brian Thomas, the Buff and Blue started strong by winning both relays on Wednesday night and never took their foot off the gas while piling up 879.5 points to finish more than 350 points ahead of second-place George Mason.For the week, GW earned 27 medals and was represented in every championship final, most of them many times over. All 18 scorers accumulated double-digit points toward the team’s total, and all five program records that the group combined to break were A-10 marks, as well.That excellence assured the team race was understandably drama-free, but the Buff and Blue still savored the chance to hoist a trophy and pile into the SPIRE Institute pool after another commanding finals session – and for the first time do it alongside the women celebrating their own title.For his efforts leading the onslaught, Marek Osina was named A-10 Championship Most Outstanding Performer.The senior from Kromeriz, Czech Republic, won seven gold medals for the week, including a win in the 200 back on Saturday in a sizzling NCAA B-cut time of 1:42.22. His other wins came in the 200 IM (1:44.72, A-10 record) and 400 IM (3:46.40), and he closed in style by anchoring a comfortable victory in the meet-ending 400 free relay with Durde Matic, Ethan Tulenko and Tyler Kawakami in 2:56.49.Connor Rodgers was tabbed the meet’s Most Outstanding Rookie Performer. The first-year from Carmel, Calif., earned gold in the 500 free (4:24.11) and 800 free relay earlier in the week and added a bronze on Saturday in the 200 fly (1:46.72).Head to GWsports.com to read more