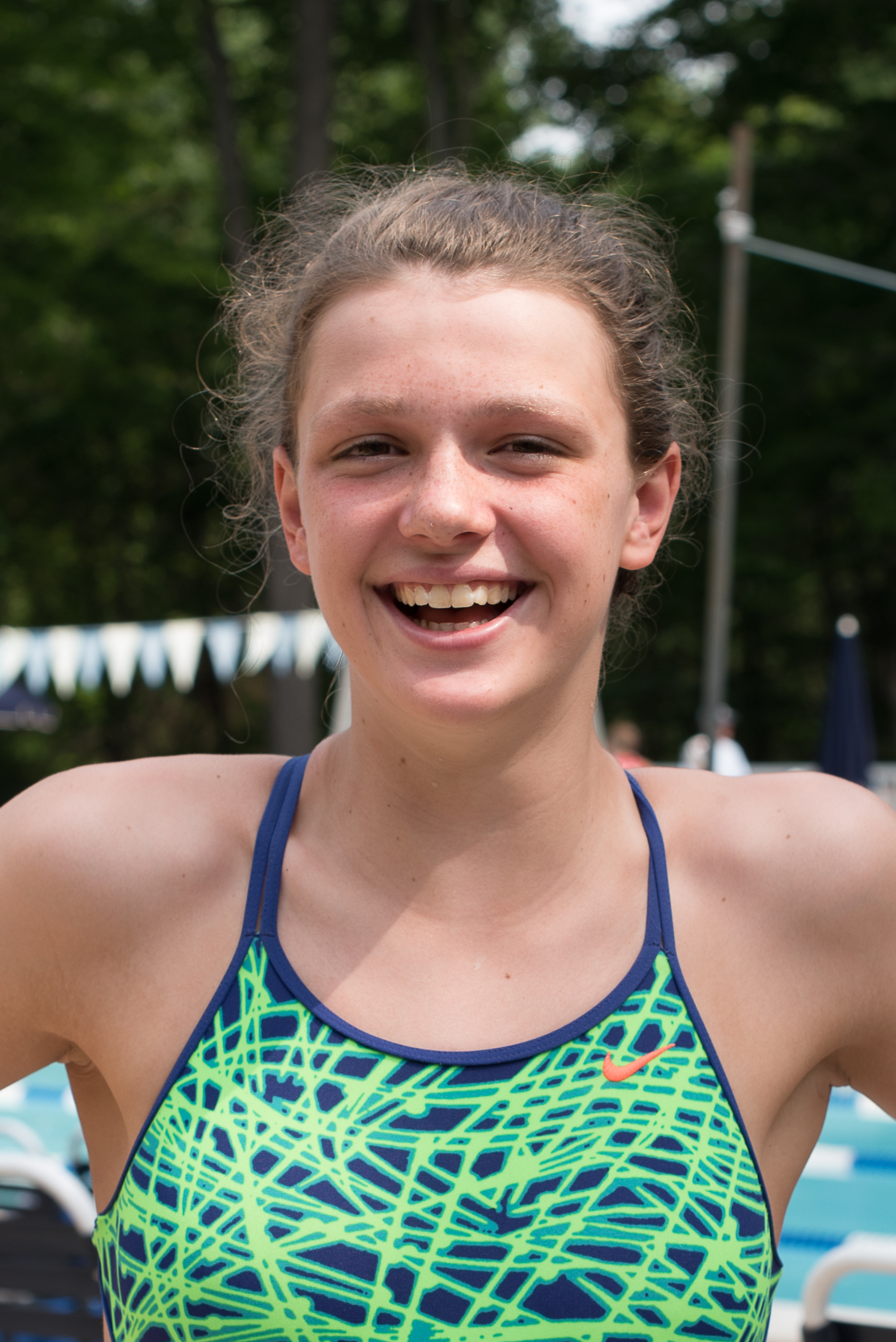 At 13 years, 10 months old, local Chevy Chase, Maryland resident Phoebe Bacon will be the third youngest swimmer—male or female—to participate in the 2016 Olympic Trials that start this weekend.

Anyone looking for the secret to her success does not have to look far. “Just as long as you’re always at practice and smiling with all your friends,” is her advice to any aspiring Olympians out there.

I interviewed Phoebe and her mother, Philippa Bacon, on a gloriously sunny afternoon at Tallyho Swim and Tennis Club, in Potomac, Maryland, while her father and brothers played in the pool. The Bacons have been members of Tallyho pool as far back as anyone can remember, and it’s where 4-year-old Phoebe first tried to join the swim team.

The U.S. Olympic Team Trials for swimming will be held June 26 through July 3 in Omaha, Nebraska, and it’s considered a great achievement just to get there. During the year, swimmers compete at major swim meets across the U.S. and to go to Trials, they must make an incredibly fast qualifying time known as a “cut.”

Now, Phoebe is set to fly out on Friday to Nebraska with the other members of the Nation’s Capital Swim Club (NCAP) who have also qualified to go to Trials. At Trials, swimmers will race again and the top two winners in each event will make the 2016 Olympic Team.

The 2016 Olympics will be held in Rio de Janeiro, Brazil, with swimming events held August 6-13. But don’t look for Phoebe in Rio this summer. The rules of the Olympics say that you must be at least 14 years old to swim—and Phoebe does not turn 14 until August 12, after the games begin.

But is that really a disappointment? “I guess I’m a little bit disappointed, but not really,” Phoebe said. “I still think it’s such a cool thing to go there and swim against so many different-aged swimmers than me,” she said.

Even though she can’t make the team, participating in Trials now will give Phoebe great experience with the process. “It’s really for experience and fun,” she said.

Phoebe will race on Monday June 27, in a brand-new Speedo racing suit that she’ll get from NCAP. And while the technical racing suits make a little difference, “it’s really the swimmer, not the suit,” Phoebe said.

Nervous? Not Phoebe. For her, having fun is what matters most and she is definitely excited just to be part of the whole experience of Olympic Trials.

“It feels really awesome, knowing that, and being able to swim at such a big event at such a young age,” Phoebe said. To put it in perspective, the CenturyLink Center where she will swim in Nebraska seats 18,300 people, with the most expensive tickets selling for up to $1,100 each.

According to USA Swimming, for the first time ever, tickets for the Olympic Trials in swimming completely sold out and more than 200,000 total tickets were sold for the eight days of competition.

Phoebe said her top goal is to make it to semi-finals. “I think I have an okay chance, with my training that I’ve been doing, but it still means I have to drop some time,” she said.

This will be Phoebe’s first meet in a huge arena. But other than training in long-course swimming pools, she has not been doing anything special to prepare. Mostly she’s relying on years of practice.

With less than a week until Trials, I talked to the 5’ 8.5” tall Phoebe about how she got to where she is today, from how many hours each day she trains to what she eats for breakfast (spoiler: there is no magic food that turns you into an Olympic swimmer).

Phoebe said she has been swimming since she was three years old, a fact her mother confirmed by adding that at age three, Phoebe was swimming the butterfly.

What really makes Phoebe such a talented swimmer is her love for the sport, the fun she has with it and maybe most important, the friends she has made along the way. Repeatedly Phoebe brought up her friends, coaches and teammates cheering her on as making all the difference.

Phoebe said she first started thinking about making a cut last summer, when she noticed her backstroke times were getting close. “Since then, that was my big goal and I finally got it,” she said.

Phoebe tells me she hasn’t started packing yet and has no idea how much she can bring until she sees the size of her suitcase. But she’ll have her own cheering section once she gets there. All her family is coming out, including cousins, grandparents, aunts and uncles.

NCAP Coach Ian Rowe coaches Phoebe at the American University pool from two and a half to three hours each day, five to six days a week. Up to now, she has not been running or working out at a gym, but she’ll be starting that next year.

And how many calories a day does it take to keep up with that kind of workout? “I eat a lot more than the average 13-year-old,” she said. Phoebe said she doesn’t count calories, but an average breakfast is two bowls of cereal, a bagel, fruit, yogurt—a lot of different things. Her favorite food is ice-cream.

Her coach recommends foods she should or should not eat, especially close to a race. During meets, Phoebe said she brings snacks, mostly protein bars or crackers, but nothing big or heavy.

Phoebe is a rising 9th grader at Stone Ridge School of the Sacred Heart, a Catholic college preparatory school for girls in Bethesda, Maryland. Given her practice schedule, Phoebe tells me her grades are “okay,” but she wants them to be better. Her favorite subjects are science and math.

For fun, besides swimming, Phoebe likes to play other sports like hockey, soccer and basketball. “And I really enjoy rock climbing,” she said. Phoebe also loves to cook and watch some of the competitive cooking shows on television.

Phoebe is the third child in a family of four, with an older brother and sister and one younger brother. “We all do sports and we’re all always outside playing or running around, or playing inside,” she said.

Also important to Phoebe is her summer swim team, the Tallyho Foxes, led by head coach Richard Rosenthal. “I go to every [summer] meet that I can, and that’s probably one of my favorite times in swimming, because everybody is cheering,” she said.

Being with friends at practices, acting a little goofy, cheering each other on and talking to each other is the best part of swimming for Phoebe.

Phoebe said she hopes to make the next Olympics, which will be held in the summer of 2020 in Tokyo, Japan. After backstroke, Phoebe’s next best event is the individual medley (IM), which is a race with each of the four strokes.

And while Phoebe continues her training over the next four years, she has simple advice to young swimmers looking to go to the Olympics someday. “Keep training and always have fun,” she said.